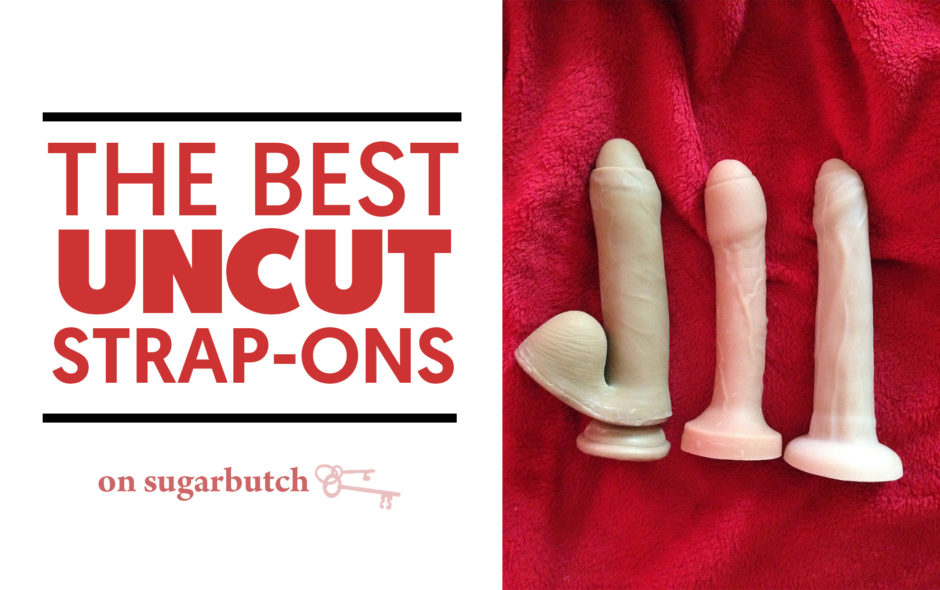 Update: I found one! It’s not as great as I want it to be, but it is something! Review here: Uncut with Movable Foreskin, the King Cock from Cal Exotics.  None of these do that. Yep, I know. But since strap-on manufacturing is changing practically monthly, perhaps that’s something we can expect in the near future!

But either way, What I really want is one that moves. Because even still, after all these years, I am really cock-centric in my play.

This is a little personal, but when I first got the uncut packer by New York Toy Collective (featured as a little bonus at the end of this post), I was unusually drawn to it and it felt like mine and embodied in a new way. I thought about it, and given my parent’s politics, if they’d had a kid who was assigned male at birth, I actually think my parents would not have had him circumcised. So it actually felt closer to what, perhaps, my body would have experienced. That feeling kinda trips me out, even still. And I guess that’s why I am particularly drawn to these. 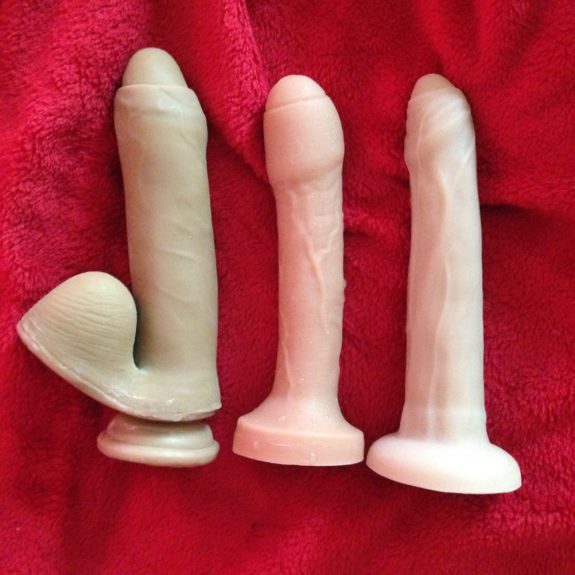 The Uncut Emperor came to me from She Vibe, which has an incredible collection of strap-ons. This is not silicone, its some sort of TPE — which is “thermoplastic elastomer.” Its very common for strap-ons to be made from this material, but you wont find it in most of the feminist, queer- and women-centered sex toy stores, because the material is porous. But on the other hand, TPE is much less expensive than silicone, so this one is about $30-40 in various places online, which is a big difference from the $100-150 pricetag of most silicone dildos. This one is “body safe,” meaning it does not contain any phthalates, which is a particularly bad type of processed plastic that is absolutely not body safe and known to cause cancer).

So, because it is body safe, because I was really looking for a great uncut dick, and because SheVibe highly recommended it, I was excited to give it a try. It is a handsome shape, and the colors work for my skin (though that means they are very white, so that’s not so great as an inclusive offering).

I can see that some of the photos of the Uncut Emperor have the foreskin peeling significantly back, but my model does not do that. Maybe it was just a slightly older design, and it’s been updated? Maybe mine was just more attached than others? So while it does peel back, it’s more like peeling a banana than sliding foreskin over the head. Which is what I’m actually looking for in the movement part.

Overall: Not impressed. Very hard to wear in a harness, got damaged and warped by being in a drawer, skin doesn’t really pull back how I want it to. I did play with it a few times — and I’ve got to get a silicone cock with a suction cup! — but it’s not something I pick up anymore. 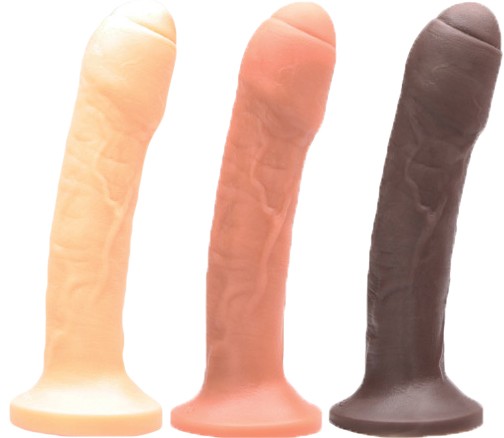 Tantus makes an Uncut #2 as well, which is about 1” shorter in length but only about 0.15” smaller around. I prefer the bigger #1, but considering my most favorite cocks are quite a bit larger than the Uncut #1, it feels rather slender for me.

Which, for me, makes it a really great butt toy.

It’s slender, but it still has a pronounced head that gives some texture going in. The silicone is body safe and easy to clean, which is necessary to me for butt toys.

It’s part of Tantus’ dual-density line, which makes it much more squishy than their usual silicone, much of which is very hard. But even so, it’s hard to feel the difference in the two layers of silicone — they still both feel fairly solid, and it’s not quite as malleable as I’d prefer. 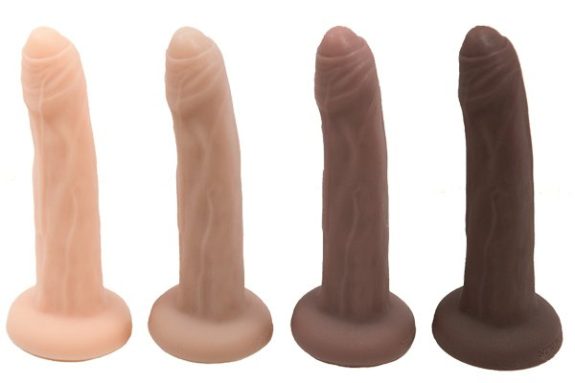 See this? This is why I’m spoiled with the dual-density type of materials. New York Toy Collective — and Vixen Creations — have raised the bar so high with the feel of strap-on dicks, that most other softskin or pureskin or silkyskin or whateverskin that other manufacturers make pretty much always falls short. I’ll admit, I’m spoiled. You spoil me, NYTC!

Again, the skin does not move. Still bummed about that, but what can you do. I love the tapered head on this one, it also makes it a really good butt toy — or a really good blow job toy, because it can slip just a little farther since the tip is slender. It’s long, easily harnessable, with just the right amount of give.

You can get the Ellis either with a vibrating bullet that inserts into the base, or a suction cup! Personally I’m into the suction cup, but if you are someone who likes bullet vibrators next to your bits, go for it.

Also! Use the code “SUGARBUTCH” at newyorktoycollective.com and you’ll get $5 off — basically free shipping! 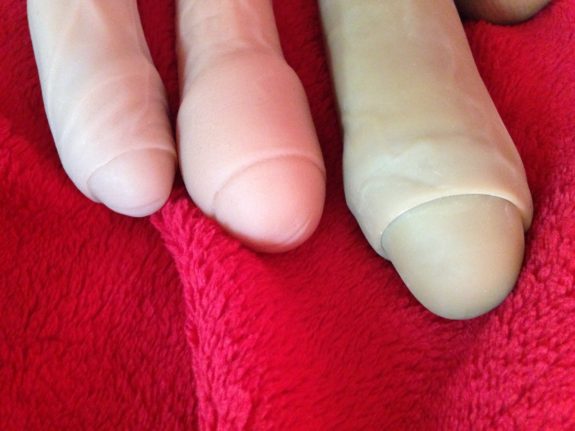 This one isn’t an insertable (at least, not really), but the New York Toy Collective’s Pierre is one of the few silicone packing cocks out there, period — and it’s also uncut. It comes in two different sizes, small and regular, and four different lovely colors.

This one and the Masho are my favorites to pack with these days. I love how Pierre feels, and I love feeling the tip in particular. I have taken to starting blow jobs on a packer in my own sex play lately, and I really like that … it feels like starting at the beginning, and then watching the process of getting hard. It feels more intimate, to have my dick sucked when it’s so soft and vulnerable and small. And it feels sweet, and revealing.

Overall: One of the best packers on the market, period. It’s got a featured spot.

These toys were all sent to me for an honest, unbiased review. You can buy Pierre and Ellis over at New York Toy Collective, Uncut #1 and Uncut #2 from Tantus, and Uncut Emperor from SheVibe — or your favorite feminist, queer, women-centered sex toy. Find your closest sex toy store on this sex toy store map.

Don’t forget — Use the code “SUGARBUTCH” at newyorktoycollective.com and you’ll get $5 off — basically free shipping!