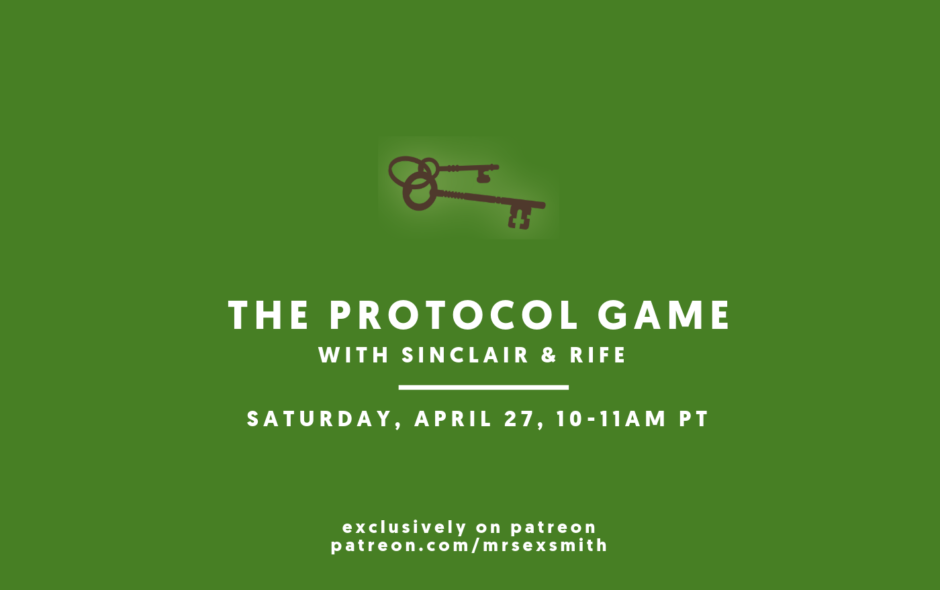 It’s a game: Try out one protocol a week for a year — keep ones you like, forget those you don’t. It’s pretty simple!

rife + I are doing a webinar at the end of April where we’ll walk you through how to actually come up with 52, making training categories, and some best practices for making protocol happen. The webinar is on April 27th for $5+ patrons — sign up here.

We’ll do most of the workbook right on the webinar, so you’ll walk away with the game set up — you won’t stick it in your desk drawer and discover it three months later thinking oh yeah, I was going to do that wasn’t I?

I highly recommend it for folks in and out of power dynamics or relationships, for dominants or subs or switches! It’s been very helpful & successful for un-owned subs in the past; it gives a sense of structure, things to practice, and ongoing reminders of D/s identity.

Some of our key learnings:

The first few times we set it up for ourselves, rife + I found that sometimes the protocol I set up for him were actually things I had to do — like: “receive a flogging every night” is actually kinda my protocol, something I had to make happen, not his. So the second year we did the game, we each had our own.

We also split the protocols into tasks vs protocols:

Protocols are “if this then that:” when you wake up, offer me sexual service. When you shower, shave your cunt. when you do the dishes, wear a butt plug.

Tasks are one time: clean the refrigerator. Get waxed. Buy new rope.

I’ve had (mostly) vanilla friends of mine use this for other things, too. Once I helped a friend set up 52 dating experiments, because she wanted to date more but was coming up against all kinds of blocks. It can work for all sorts of realms of exploration and growth and goals.

Coming up with the actual protocols can be the hardest. I asked so many dominants if they would mind sharing their list of the protocols with me

Breaking it into training categories, or, as we call it, making a training wheel, can help with that:

(PS, it’s really helpful to have a graphic designer / illustrator as my owned property, I gotta say. Reminds me of how all those singer/songwriters marry their sound techs. I get it.)

There are also more serious high-level overviews of life like this one, from the book How To Be, Do, or Have Anything (which is actually better than it sounds).

There are other life matrix-esque charts, but it’s often best to come up with the areas of your life specifically that you want to make the most progress in. They could be the ones that are holding you back, but don’t forget the ones that are sexy, fun, power-driven, exciting, juicy!

We break protocols into multiple categories:

In her book Discipline (now out of print), Lily Lloyd set up these Three Core Rules for protocol which I really like. If a protocol goes against any of these things, don’t do it! Or, reassess it!

If all of this sounds interesting, come join me + rife on April 27th for the Protocol Game workshop!

The $5 or up levels on Patreon include the monthly webinars —— which will include D/s PLAYGROUND this summer!

2 thoughts on “Fundamentals of the Protocol Game”