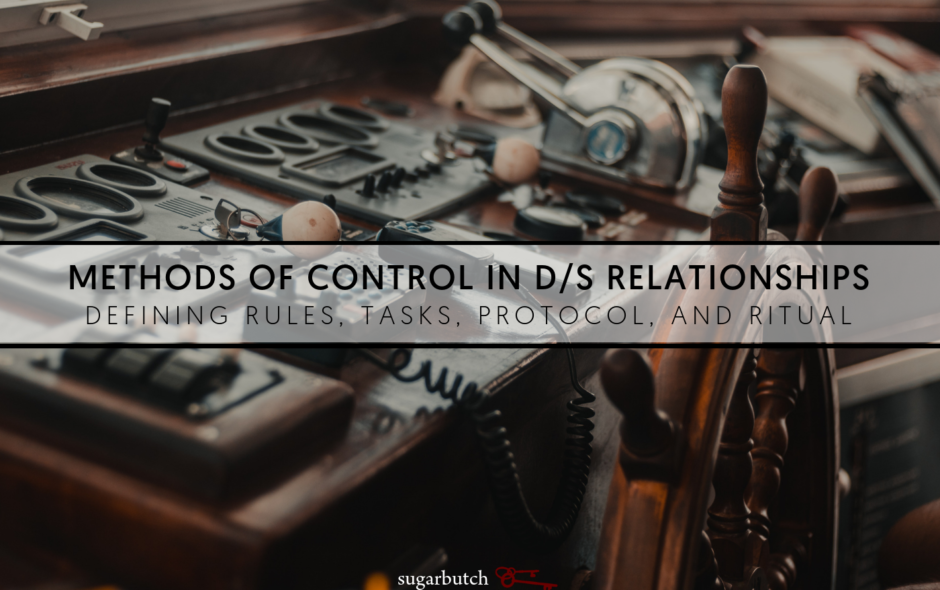 Relationships with authority exchange, using dominance and submission, are usually centered around control: who makes decisions, who dictates what happens, whose standards are upheld, who tells who to do what.

For lots of us, telling someone else what to do — or being told what to do — is the core of the fetish. It’s the thing that makes us feel all tingly and yummy and taken care of and important and good.

So, D/s relationships use a lot of rules, tasks, protocol, and ritual.

These words are often used interchangeably, but have nuanced differences. In my personal relationship, we’ve spent a lot of time ironing out what the key distinctions are and how to use them.

Your mileage may vary here — please, find and use the language that works for you. Sometimes I short-hand these in my work, so hopefully it’ll be useful to have a reference point for the definitions I’m using when I do.

”Rules” Are The Big Picture Guidelines

“Rules,” as I use them, are like a moral compass, like the underlying ethical values in the relationship.

You’ve probably been in a workshop or a classroom where the instructor set some expectations at the beginning, such as “One Mic: one person talks at a time.” (I’m sure you can think of many other examples of these.) This is a way we set community agreements with each other about the values we hold collectively, so we can be clear about the kind of behavior we expect.

Same goes for a relationship — these are the overarching guidelines we are agreeing to follow as part of our foundation.

Sometimes people call these things like guidelines, principles, or philosophies, but we call them rules — sometimes we refer to them as “capital-R Rules.” They are best when simple, clear, and straightforward (though that doesn’t necessarily mean they’re easy) — I suggest between 5-10, not very many. Because these rules are often words that have multiple definitions, being very clear about what they mean is important.

Protocols are the instructions that are followed on a day to day basis. They are recuring and time-specific, meaning they have some sort of trigger that makes them happen. If they can be explained by the statement “if this, then that,” then I consider it a protocol.

Sometimes people call this “procedures” or “rules” in a relationship, though D/s folks tend to really like the word “protocol.” Sometimes I use “protocol” and “rules” interchangeably — such as, “rife has a rule that he asks permission to get in bed.” Meaning, that is a protocol. Or, “Whether or not he uses furniture isn’t a rule for us.” But what I mean is, we don’t have that protocol. (Mostly I do this in speech and am more careful in writing, for clarity.)

Most of us have lots of little protocols like this for ourselves, things that dictate our style and habits. Examples are things like, I never wear a blue shirt with blue jeans; I always wash my dishes after I eat; I never go to bed without a cup of tea. (I bet you can think of at least five that you already have, off the top of your head.)

They should be fluid — especially when one person is making protocols for another. They can be added or removed as the needs or desires of the folks involve change and grow. Sometimes they become so integrated that they are invisible. rife and I call our protocol notes a “living document” — sometimes it changes organically, sometimes we need to have a formal check-in about it and assess.

When introducing new protocols in a relationship, do so slowly, and a few (one or two) at a time. It can be so tempting — for all of us! — to pile on the protocols and get hot and excited about it, but that quickly can become overwhelming, which both means it’s hard for the dominant to track what’s happening and it’s hard for the submissive to implement. Make sure to let everyone have time to integrate and practice the new protocol before adding more.

I’m not going to go in to enforcing protocol, but there are many complicated things to say about it.

How do you figure out which protocols you want to make? Well, that’s a process! I have a lot of theories through my workshops like The Protocol Game and the Discipline Unit of D/s Playground.

”Procedures” Are How Things Are Done

Protocol is what I want to be done, and the procedure is how I want it done. “Do the dishes every night before bed” is a protocol; “wash the dishes with this type of soap; put them this way in the drying rack organized by size; wipe down all the counters, sink, and stove; set up the coffee pot to be ready in the morning” might be the procedures underneath that protocol.

Usually, the procedure can be taught once (and perhaps guided or corrected, as time goes on) and documented clearly, and the submissive will have a point of reference. The protocol might happen daily, but the procedure is explained and then enforced.

Procedures are slightly different than rituals because while they reinforce the dynamic through controlled behavior, they aren’t necessarily intending to generate D/s headspace or a spiritual connection. They do often have multiple steps within them, but they are usually concrete steps.

Often, people include how a protocol is done in the definition of the protocol itself. Nothing wrong with that! I’m just breaking down the two different concepts for clarity.

With tasks … the sky’s the limit! Tasks are great when starting out in a relationship, because the people involved can get a sense of what they like and don’t like, what the dominant’s style is, what works, and what doesn’t. Plus, they are great opportunities for rewards (even if the reward is a spanking).

One fun way to do task assignments is to give them a task with the instructions that they will get another one when they complete this one. That way they can take their time with it — if they have an incredibly busy schedule, or if it is very elaborate, it could take a month, but if it is simpler or they have more time, it could take a day.

“Rituals” Remind Us of D/s Headspace

This could sometimes be known as “routines,” though I use the word “ritual” because it has a slightly different intention behind it — the word “routine” sounds a little more like being on auto-pilot. I think of the intention as being connection to the D/s dynamic, each other, and possibly a larger purpose — a spiritual path. Either way, rituals are intended to get us deeper into a D/s headspace, to bring more consciousness and intention. Toutines are generally intended to become background habits that propel us through our lives.

Routines are often used more in the day-to-day, and rituals are used for more special occasions, but using the word ritual for the day to day — hopefully — brings more consciousness to it.

Rituals are larger events that usually have multiple steps or aspects of protocol. They also have a particular trigger, such as: when we wake up together, then do the morning ritual.

Rituals might be daily or occasionally. We might have morning/evening ritual, or a New Year’s Eve ritual, or we might have a once in a lifetime ritual of a bat mitzvah upon turning 13.

That’s my thoughts — how do you use these words?

Do you use them in similar ways that we do? Or different? Do you prefer to call these concepts something different? Totally cool. These are ideas to jump-start what works best for you, and have clarity in the different categories of control in D/s relationships.

Hopefully, having different categories makes it easier to create and brainstorm protocols to try out.

One thought on “Methods of Control in Your D/s Relationship: Defining Rules, Tasks, Protocol, and Ritual”