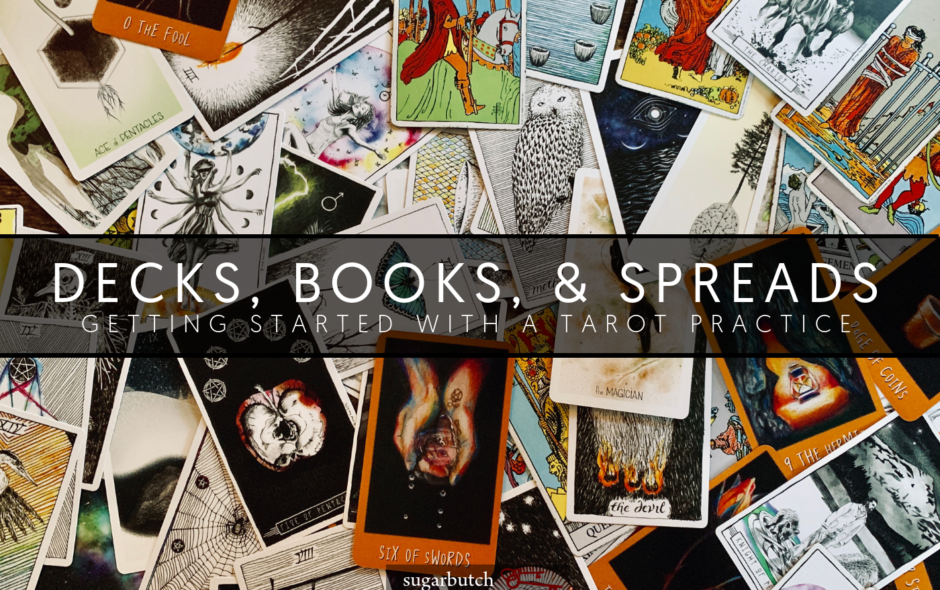 I’ve been sharing more of my tarot practice (particularly on my personal Instagram) lately, and getting some questions.

With the rise of self-publishing, artists from around the world have been able to create and publish their own decks through places like Kickstarter and on-demand — so there are literally hundreds of decks.

And then, once you have a deck, where do you start?

You only need one deck, technically, but a lot of folks end up collecting a few 9or a lot). Here are three of my favorites (and the most popular and accessible), with a few others thrown in. Ultimately, tarot decks are works of art, and you want to choose one where the art speaks to you, and you find meaning to sit with and absorb in the imagery.

The Wild Unknown, by Kim Kranz

The Wild Unknown is the most popular tarot deck right now, usurping the classic Rider-Waite deck (more on that next). Kim Kranz’s illustrations are clear, accessible, beautiful. The accompanying guidebook is simple and straightforward. It’s a great modern, simple interpretation of the concepts, and a fantastic deck to start with.

There are two websites which have catalogued all the cards in the Wild Unknown and written some of their own interpretations, and those can drop you in to even deeper meanings of the cards: Carrie Mallon, and Mira Sol Wisdom. Order it at your favorite local bookstore or new age store, or, if you must, from Amazon.

Why am I referring to it with two different names? Rider is the publisher, Waite is the writer, and Patricia Coleman Smith is the illustrator. The deck has been called Rider or Rider-Waite for decades, but many folks now are moving toward calling it the Smith deck, as the imagery is one of the most intense and lasting thing about the deck itself.

Rachel Pollack and Mary Greer are two of the most renowned tarot theorists, and all of their work focuses on this deck. They have many books (more on that below). Jessica Dore is a modern tarot reader who is using social media — Twitter and Instagram — to share interpretations based on psychotherapy concepts and models. She has online courses and classes, too.

This deck is usually less than $20, and pretty much all stores which carry tarot decks will have it. Try your local crystal – new age – witchy store, or grab it on Amazon.

Carrie Mallon is a bit of a modern tarot celebrity. I found her through her Wild Unknown interpretations and have followed her work ever since.

She has just finished her own tarot deck, the Spacious Tarot, illustrated by Annie Ruygt, and it is b e a u t i f u l. I’m already anticipating that it will be one of my most-loved and most-used decks when it arrives. Her kickstarter closes July 20th, go grab it there.

And then there are the queer decks!

There are quite a few which have explicitly reimagined some of the more patriarchal themes. Some of them, like Carrie’s Spacious Tarot above, move away from the patriarchal imagery, but still aren’t explicitly queer. But even more of them are explicitly queer, and many of the interpretations are much more modern, using queer activist language.

They often re-interpret the court cards, for example — instead of “page / knight / queen / king,” or “daughter / son / mother / father,” they might interpret them more as stages of a wisdom practice, like “seeker / apprentice / artist / mentor” (The Collective Tarot) or “beast / witch / grandmother / shadow” (Tarot of the Crone).

Rather than compile my own list, here are a few good ones: Autostraddle has a list of eight queer tarot decks, and Queer Tarot has a great list too.

Queering the Tarot by Cassandra Snow

This book started as a series on a great queer tarot website (now shut down), but lucky for us, it turned into a book. Cassandra Snow dives into the traditional meanings of the cards and offers new interpretations based on lived queer experience and

Order it at your favorite local bookstore, or, if you must, from Amazon.

One of the best interpretation and theory books I can recommend. If you want to go deep, here’s the one to go to. It has in-depth writings for each of the cards, of course, but it features more philosophy about the progression of the Major Arcana than most books do, and more connection between the cards and the journeys embodied in the cards. For example, in the six of swords, it might reference how it’s a bridge from the five to the seven — things like that. Highly recommend it if you want to get more into the archetypes, hero’s journey, and interwoven connections of the tarot. Order it at your favorite local bookstore, or, if you must, from Amazon.

Tarot For Your Self: A Workbook for Personal Transformation by Mary K. Greer

Mary K. Greer is considered one of the great tarot leaders, and this workbook will make it obvious why. It is a great resource to keep unfolding all the ways that tarot can be used for personal insight and growth.

Order it from your local bookstore or new age store, or, if you must, from Amazon.

I have to mention Lindsay Mack and Soul Tarot School — she has a variety of ecourses, but also her tarot podcast has been hugely influential for me. I look forward to her “monthly medicine” episodes every month, and it’s one of the few podcasts I actually keep up with.

One of the best ways to get to know your deck is by pulling a card daily.

If I want to go a little deeper than one card, if I have some time or a bigger psychoemotional puzzle, I might do a three card spread instead. Labyrinthos has a list of 18 simple 3-card tarot spreads, and I use these frequently for just a little more than a single daily pull. I particularly like Situation – Action – Outcome, and use that often.

Katey Flowers has a tarot deck interview spread that I usually conduct any time I get a new deck. It feels like a way to ground into the new imagery and tone of the deck. It asks things like, how can we work together? What can you teach me? Describe yourself; describe me. I find it insightful and helpful, like a first date with the deck.

One of my favorite things to do is to pull out the cards on a particularly meaningful day. Sometimes that’s my birthday, a holiday, the solstices and equinoxes, an eclipse, a new moon or full moon, a life-changing event. There are dozens of spreads for all of these, depending on what you’re looking for. A quick Google search for whatever you’re looking for will bring up many options, as will some looking around on Instagram.

For example, I recently used this spread by @lionharts on Instagram on July 2nd, for the Total New Moon Solar Eclipse in the sign of cancer. But it could be any particular occasion — try Pinterest, Instagram, or just a Google image search for the occasion + “tarot”, and plenty of spread options will come up.

Ultimately, tarot is a personal journey.

Discard everything I’m saying here if it doesn’t resonate — Find what works for you.

One thought on “Decks, Books, & Spreads: Getting Started with a Tarot Practice”