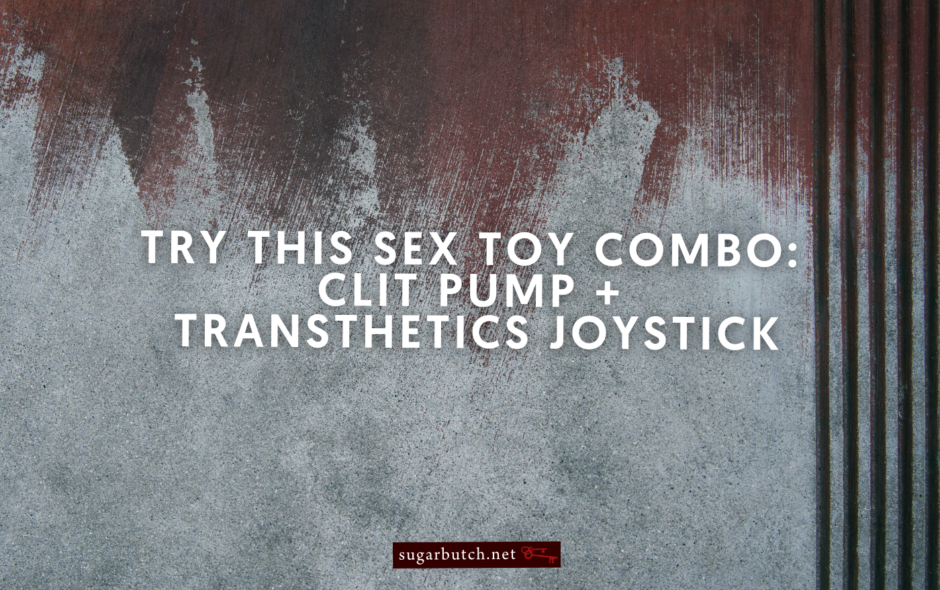 Once upon a time (you might remember this), I wrote up the Crash Pad Series episode #319 with ACAB and Unkle Daddy, who used a clit pump and a sleeve over it during their play. Go check out the scene on Crash Pad if you haven’t seen it yet — or bookmark it for later — it’s pretty fantastic.

I’ve had a clit pump for years, but ever since that scene I’ve been searching for the right sleeve that would work to go over it. I bought a few things, mostly Doc Johnson products, because those are readily available and affordable, though they tend to be pretty awful quality silicone (are they even silicone? Maybe more like sil-i-gel, or one of those other plastic variants). 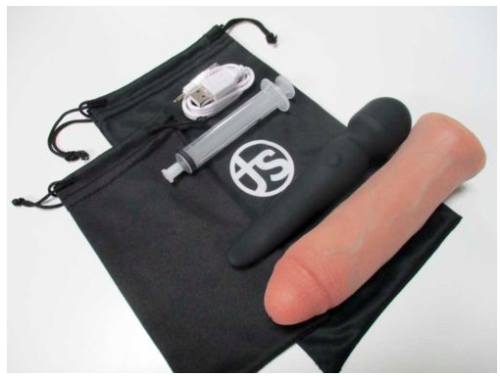 But finally, I came across the Joystick, which is made by Transthetics, a company primarily making prosthetics geared toward trans men. (They have some other interesting products too, though because they’re a small company I have been purchasing their toys myself and I just can’t afford to try them all. I have the Hot Rod in addition to the Joystick, as I’ve been working on a post about strokers and extenders.)

The Joystick also has some other very cool features that I won’t really go into here, but you can read about on their website, including a reservoir in the tip that can be used to hold fluid and ejaculate, and a vibrator that you can control with a ring. They call it “strapless,” and say that it can be worn without a harness, and suggest to buy it with their brand of undies that are suggested to hold the Joystick in place. I didn’t buy those — if you did, how are they? Worth it? — and if you don’t want to either, you might want some men’s underwear with a “separate pouch” or o-rings built in. They’re often called “enhancement underwear” or some such. (I’ve been looking around for a guide to them — I might have to make one myself.) These are the ones I like, but there are many. They also hold a packer in place really well.

The LA Gear pump is much higher quality and has lasted me more than 15 years now, but it is much more expensive ($100+ for all the accessories and the pump). I’ve written about clit pumping a few times in the past, but I haven’t detailed the LA Gear pump specifically — though of all the pumps I’ve written about and tried, it’s the only one that I still have and still use.

The NYTC pump is new to the market and I’m thrilled that they’re offering a pump at a much more affordable price ($40!). The deluxe NYTC pump has a release valve, which I highly recommend if you’re game to spend a few more dollars, and it comes with three different sizes of cylinders, which may not be useful right at the beginning (you might want to stick with the 1″ for a while) but you might indeed want to someday graduate to 2″ or beyond.

Unfortunately, the NYTC pump won’t work with the Joystick sleeve, because you can’t disconnect the pump cylinder from the hose without losing the seal. But, it’s still an excellent option if you’re reading this and want to try pumping, but don’t want to invest in the LA Gear pump yet. And there are other great things you do with it — like pump, and then wear a sleeve like the Hot Rod or the Phallos Stroker (which is currently sold out, but I will be writing about this more soon!).

So how do I do this?

It’s a pretty simple premise: use the pump, disconnect the hose from the cylinder, and then put the Joystick sleeve OVER the pump itself.

You might have to fold the Joystick back a bit in order to get the cylinder deep enough into it. The hole in the Joystick is tight enough that you can’t just push the cylinder into it — or, at least, I can’t. If you have any suggestions for how to best insert cylinder, please let me know! Email me or leave them in the comments.

It is generally safe to leave the cylinder on for half an hour or more, but it might take some trial and error to practice with how intense (how much PSI, I suppose) you want to pump before adding the sleeve, since it’s much harder to adjust the intensity after the sleeve is on and the pump hose is disconnected. Try it less intense at first, and work up to more intense.

It might take some practice and careful play to figure out how much sensation is too much and what feels good — but hey, that’s where the fun stuff is, right?

I’m sure you can figure out that part.

Have fun! If you try it and have any tips, I’d love to hear them in the comments.