I have been so busy telling you all about Say Please that I have barely even mentioned some of the other recent notable books I’ve picked up. All are fantastic reads and have plenty to offer for the novice or the very experienced kinkster. 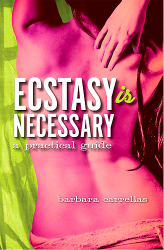 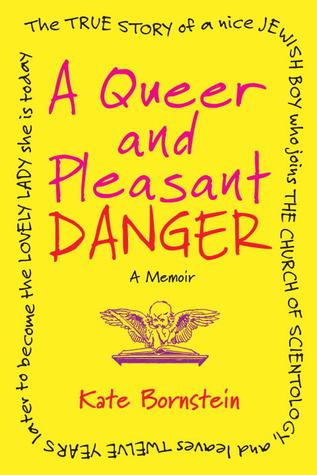 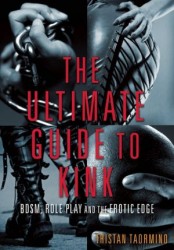 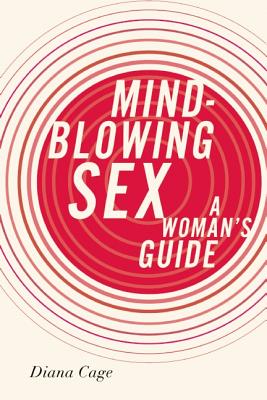 Ecstasy is Necessary by Barbara Carrellas I’ve already mentioned on Sugarbutch, but it’s worth mentioning again if you haven’t read it yet. If you’re interested in exploring your own sexuality, getting closer to your own desires, having a lovely introduction to some tantric explorations, or taking a good, long reflective look at your sex life and relationship/s, this is an incredible place to start.

Queer & Pleasant Danger by Kate Bornstein is a beautiful, stunning memoir about Kate’s time as a scientologist (!), then being excommunicated and losing her family, then transitioning and coming out as a kinkster on the West coast, and finally moving to New York. It’s an incredible story and I loved every page.

The Ultimate Guide to Kink by Tristan Taormino really is the Ultimate Guide to Kink. There are essays in here from all sorts of mentors and experienced authoritative kinksters, and the book covers all kinds of fascinating topics. I’m especially excited about Barbara Carrellas’s chapter on kinky tantra, the age play chapter, and the “inside the mind of a sadist” chapter. I haven’t finished it yet (I’ve barely started it, actually) but I’m already thrilled. Cleis Press is contributing amazing things to the kink and sexualities worlds and I’ll read anything they put out.

Mind-Blowing Sex: A Woman’s Guide by Diana Cage might look like some basic women’s sexuality book, but it isn’t. It’s a complex commentary on our sexual culture and includes tons of ideas, exercises, and prompts to get you digging into your own sexual self. Kristen read it cover to cover and pronounced, “I’m going to send a copy to my sister.” It’s the kind of book that all our younger sisters should have (after we finish reading it).

There have been so many great books released this spring! I’m also really looking forward to Are You My Mother by Alison Bechdel and Why Be Happy When You Can Be Normal by Jeanette Winterson. I haven’t been all the way through the Lambda Literary finalists, though I like to pick through that list because they are often the best of the best. And of course I’ll be at the Lammys this year! Very excited to continue attending and being involved.

What have you been reading lately? Anything good?

It’s that time again … Sideshow! The Queer Literary Carnival, the reading series hosted by myself and the lovely Cheryl B., is upcoming next week on Tuesday, June 8th. Since June is Gay Pride Month, we wanted to do a queer theme, and decided on interesting perspectives on butch and femme. It’s going to be a great mix of readers!

If you’re in New York, or nearby, please come join us. 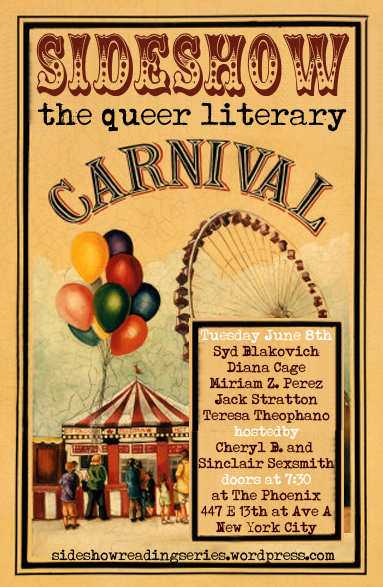 How fucking hot are they?? This is going to be good.

Miriam Z. Pérez is a writer, blogger and reproductive justice activist. She is the founder of Radical Doula, a blog that lives at the intersections of birth activism and social justice. Pérez is an Editor at Feministing.com and works with the National Latina Institute for Reproductive Health. Her writing has appeared in various publications and two recent anthologies: Click: When We Knew We Were Feminists and Yes Means Yes: Visions of Female Sexual Power and A World Without Rape. Pérez lives in Washington DC.

Jack Stratton is an open minded, sex positive, mostly-straight, mostly-top, non-monogamous, writer, skeptic, foodie, graphic designer and aspiring dandy. He is a native New Yorker who is obsessed with kink, fan fiction, postmodernism, women and ties. He’s hardly been published anywhere, which is a damn shame. He thoughts and work can be found at writingdirty.com.

Teresa Theophano is a writer, social worker, and community organizer. She is the editor of Queer Quotes, published by Beacon Press in 2004, and of the forthcoming anthology Headcase: LGBTQ Writers and Artists on Mental Illness. She has also contributed to numerous anthologies and Web sites, including glbtq.com and Planned Parenthood. A former assistant editor at St. Martin’s Press, Teresa now does social work in Harlem with mentally ill homeless adults, and assists with projects at the National LGBT Cancer Network.

And as usual, Sideshow! The Queer Literary Carnival is hosted by me, Sinclair Sexsmith, and Cheryl B.

Texts on my way home, before the show:

SS: I am still so hot for you. (this is ridiculous)
Penny: I was just thinking of you baby. xo
SS: Oh? something dirty I hope. I want you up against a fence, where everyone can see how you flush when you come.
Penny: Dirty boy. I want your head between my legs where it belongs.

… and that did it. God I love it when she says things like that. This is some of the dirtiest sex I’ve ever had, with Penny, and she keeps pushing me, pulls topping from me in new ways.

I had to get off before going back to Midtown for the radio show last night. I kicked off my shoes and shorts, strapped on, jacked off.

I came fast, swearing fuck and oh god with a string of dirty language in my head: that’s right. take my cock in deep. I like it when you struggle against me. Go ahead and resist, I’ll just go harder. You can take that can’t you. Can’t you. You like my cock in you. You like it when I come inside you. That’s right. … but eventually it was the memory of her clit pulsing in my mouth, my fingers tightly squeezed inside her, the way her thighs shake, that sent me over the edge.

(It occurs to me now that I’ve rarely seen her face when she comes. She likes it from behind, my fingers on her clit. Moaning into the mattress. Then there is mymouth on her, quickly becoming a surefire way to get her off. I rarely see her face. I’d like to. Like to see her eyes, her mouth open and gasping.)

So I jacked off. And – crap, lost track of time. I sped into Midtown, still strapped on* with my favorite Silky.

I got out of lateness free because my name wasn’t at the security desk out front – sometimes it’s under Smith instead of Sex, but this time it was just not there. Diana blamed security, but I knew it was because I’d spent that extra minute with my cock in my hand.

Diana looked great. Penny tuned in, and I read an excerpt from open up for me, a password-protected post from May. Diana went right to commercial, blushing, and said, “Damn, that is dirty! Dirtier than anything you’ve read on the show before … ”

And she’s right. That girl is filthy. I love it.

Plus? I was having the best hair day ever** – too bad it was radio.

I’ll be on Sirius OutQ Radio for The Diana Cage Show tonight at 10pm EST. You may know of Diana from such fabulous things as books like Box Lunch, Girl Meets Girl: A Dating Survival Guide, or formerly editing the fantastic dyke sex magazine On Our Backs. And now, she blogs at OurChart.

Get a 3-day trial for OutQ radio – news, interviews, and music for the queer community 24/7 – online at SiriusOutQ.com. Listen in tonight to hear me ramble about really good sex with Penny, dating, being an aspiring stud, butch identity politics, and who knows what else.

Jenny Shimizu is also scheduled to be on the show tonight, and I hear Diana promised to wear strappy sandals for me. It’s also nearly a hundred degrees in New York City – it’s gonna be fun.

I love heels. Stilettos, kitten heels, boots, even wedge heels. I love how they enhance the S-shape of a woman’s body.

Growing up in a feminist household, it was ingrained in me early on that high heels are bad for women’s feet and hips, that they cause shinsplints and hip problems and weak knees and all sorts of things. It took me a long time to come to my own acceptance of liking high heels on femmes … even having a bit of a strappy sandal fetish, I might say.

Diana Cage and I were talking last night on her radio show about my turn-ons, and I mentioned heels, though not without the caveat of the feminist knowledge of how damaging they can be to a woman’s body.

But, Diana told me about a recent study where wearing high heels actually improves the muscles on a woman’s pelvic floor, thus making her, you know, tighter.

I looked it up. From the BBC – High heels “may improve sex life”: An Italian urologist and “lover of the sexy shoe” did a recent study which showed that women who wore a 2″ heel or higher had as good posture as those who wore flat shoes, and also showed “less electrical activity” in their pelvic muscles, which are not just useful in the organs of the body (like the bladder) but also in increased sexual satisfaction and performance. “This suggested the muscles were at an optimum position, which could well improve their strength and ability to contract. The pelvic floor muscles are an essential component of the female body.”

Probably most of us have heard of PC muscle exercises, “Kegels,” as they’re called, to strengthen the pelvic floor – same idea. It makes sense that heels would improve these muscles, when I think about it … and I think it’s another subconscious way that heels sexualize a woman’s body.

I’m sure it’s still possible to damage your body by wearing heels constantly, this can’t undo all the other potential damage. But I’m also glad to know that there is some physical good that comes from wearing heels.

Well, Diana Cage has asked me – as “Sinclair” – to join her on her Diana Cage show on Sirius OutQ radio tomorrow, Thursday March 20th, from 10pm-1am. She wants me to come prepared to talk about my sex life, quickies, dating, sex blogging, and what it’s like to have my intimate sex life online for the world to see.

Sirius is a subscription radio (pretty cheap though, $12.95 a month), but you can get a 3-day trial for free if you’d like to listen in.