We both attended a Body Electric workshop over the weekend—I’m completely wiped and Kristen is energized and tender, so we kept it pretty low-key. We had a very small gathering of a few folks over for cupcakes and champagne and fancy cheese, Kristen received a few sweet gifts, and generally enjoyed ourselves and each other’s company.

There’s a love letter coming, but meanwhile, I want to say happy birthday to my amazing girlfriend. I love that we get to explore and experiment together, and I feel so lucky to have found someone so willing to love well, work well, and grow well with me.

I love you Kristen, thank you for sharing these beautiful years of your life with me. I wish you big dreams and explosions and fireworks in your 30th year around the sun, and I’m so excited that I get to be there with you, here and beyond. 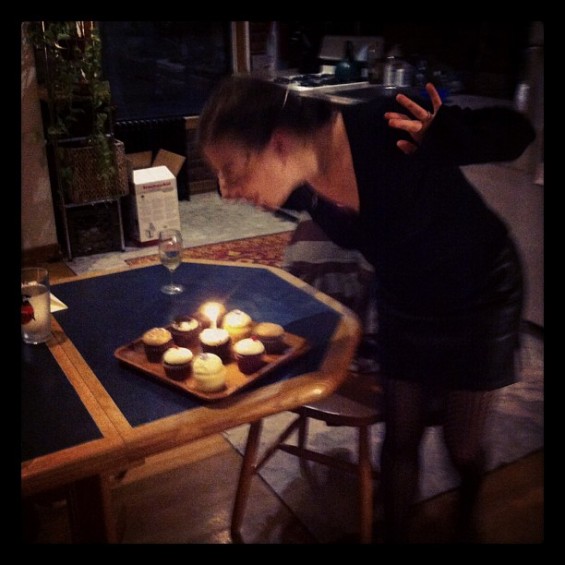 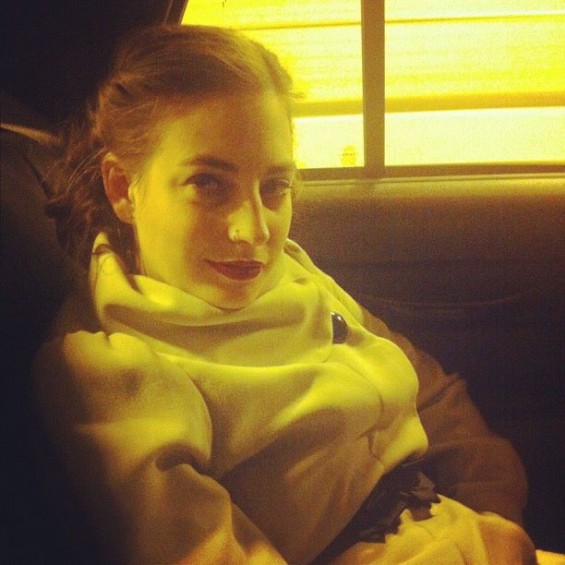 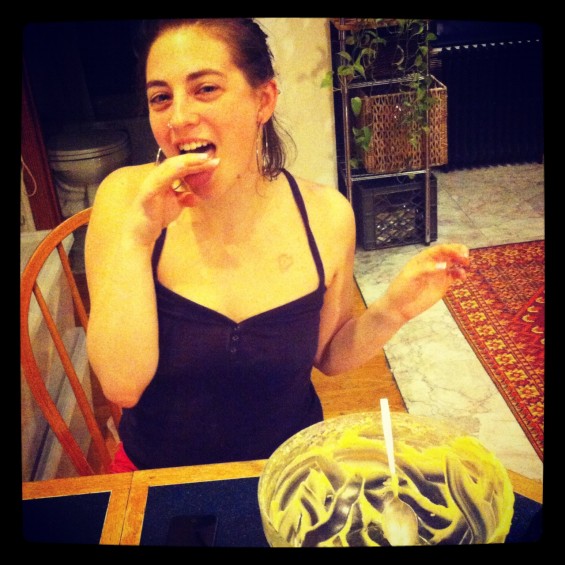 So I’m one of those people that makes a lot of mixes. It used to be mixed tapes (where I’d elaborately write all the tracks out in different color pens), then CDs, and now it’s iTunes playlists. I’m constantly downloading (and paying for!) new music, constantly updating my current “what I’m listening to” playlist, wiping it clean and starting again with whatever tone I’m currently craving.

I finished this playlist in December, for Kristen. It’d been a while since I’d made her a mix, probably since A Thousand Kisses in 2009, though I’d made some others that I’d shared with her, they just weren’t specifically for her. This one, though, is.

I love that I can share it—you can stream it on 8tracks, though I don’t love that 8tracks won’t let you play it in order. So I’m also uploading it to sendspace, you can download the whole thing there (though you’ll have to put it into your own playlist in order, I still can’t figure out how to include the iTunes playlist file).

a hot ride from mrsexsmith on 8tracks.

Cover image, if you want to download it, is here. And now, the tracklist:

Starling – Tori Amos
Gotta start out with a bang, y’know?

Safe in Your Arms – Paula Cole
Because there’s nowhere safer.

Sugar Buzz – kd lang & the Siss Boom Bang
Can’t help but think of you when I hear this song. (Also I totally mistype ‘Sugarbutch’ when I write out the title, every time. Such finger memory.) It’s like the song was made for us.

She’s Got To Be – Amy Ray
Though Amy Ray has said it’s about reconciling with an inner girl as a butch, it’s also a romantic love song about femininity & masculinity

Forever – Ben Harper
“Not talking about a year, no not three or four / I don’t want that kind of forever in my life anymore.”

October – Rosie Thomas
“Make her a flower in late december when the sun is not shining on her.” “Take photographs of her on brooklyn streets on october.” Love the simplicity of this arrangement, and her sweet voice

Sweetness – The Waifs
“Music gets me in the mood / it kicks in and I sit back / and think of you,” and “you mean stuff to me.” Yeah.

On Your Arm – Schuyler Fisk
“You always felt like come / you knew my favourite song / I love the way you say my name / I love just about everything.” and it just gets better from there. I first found Schuyler because of her Paperweight duet with Joshua Radin, and her solo work is really excellent too.

Beautiful – Meshell Ndegeocello
One of my all-time favorite love songs.

Make a Name for Me And You – Rachel Cantu
It kind of sounds like a sad song, but the refrain is about making a name for ourselves, and as we’ve started to talk about that this song sticks to me. “I know your vices and those are your choices / and I want to be there for you.”

Somebody Loved – The Weepies
It’s kind of amazing to be somebody who is loved so deeply, so well.

Snow Cherries from France – Tori
I think of this when I travel sometimes. But now you know I’ll always bring back snow cherries.

Crystalised – The XX
“I’ve been down onto my knees / so don’t think that I’m pushing you away / and you just keep getting closer / when you’re the one that I’ve kept closest / go slow.”

Fancy – Drake
It’ll just always be a song for you. Also can you believe he rhymes “concealer”? Impressive.

Sexy and I Know It – LMAO
Because you blush when this song comes on, and that makes me smile.