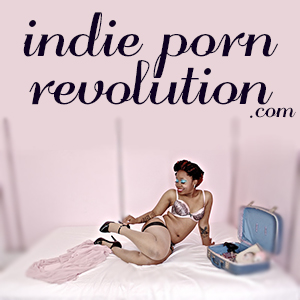 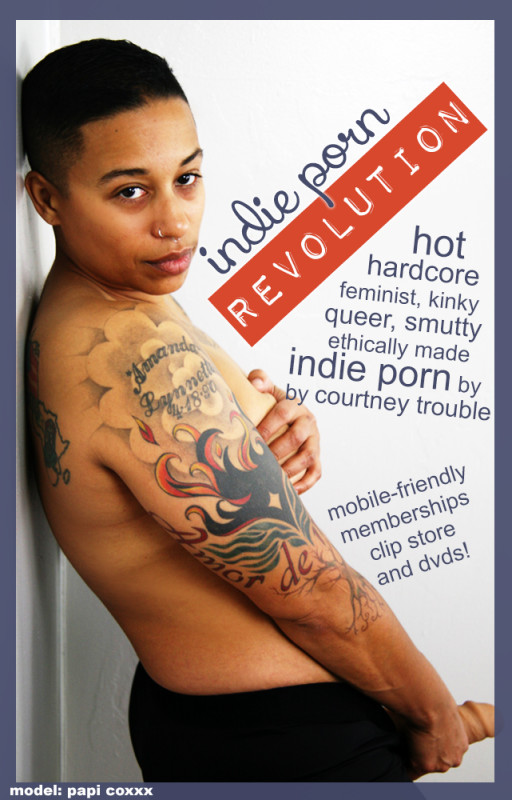 I remember discovering Courtney through Bitch Magazine in the late 1990s when I still lived in northern Colorado. NoFauxxx had ads in the early issues, and I spent a significant amount of time online (trying to escape the life I was confused to find myself living), and I of course went to visit the site immediately. Being a cheapskate, and not yet understanding and feeling how important it is to support artists with money, and not having any idea how to really use my own money yet, I didn’t get a membership for probably almost ten more years, but you better believe I followed the work in that time.

(And yes, that is exactly what I mean, pervert.) 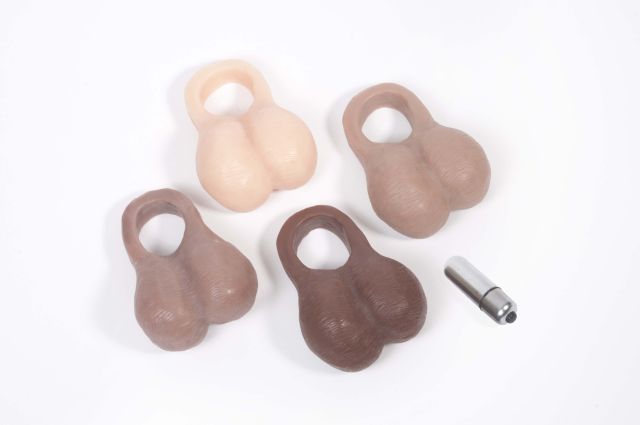 I had my hesitations about the Love Bump. It’s kind of odd to be able to add and remove the balls from the dick, kind of … disembodies them in a way that is weird. I have had mixed feelings about balls in general, through my 15+ years (!!) of using a strap on for sex. In the beginning, I was often shamed by my partners for wanting dicks with balls, or for wanting anything that looked realistic. It was deemed “not lesbian enough” and only very non-realistic looking dicks were approved in that relationship.

Now, there is nothing wrong with wanting a dick that doesn’t look realistic. If that’s what you want, I totally support that. But in my book, it’s not okay to shame someone for wanting something that you don’t want. I’d love to encourage us to talk about things in terms of “our personal likes and dislikes” rather than “why someone else liking something that I don’t like is bad and wrong.”

As the trans movements have grown in the recent decades, so too have the options of realistic looking strap on dicks in feminist and queer toy stores. More and more of the dicks are realistically shaped and colored. I’ve heard a lot of folks wanting for less realistic colors lately, actually. (Which is why it’s exciting that NYTC is offering the Shilo in other colors!)

And as the options have shifted, and my own sexuality has evolved, and as I’ve had more permission to be cock-centric and cock-based in my sexual play, I’ve been gravitating more and more toward strap on dicks that roughly match my (white) skin tone, realistic shapes, and balls.

I like how the balls feel. I like the weight. I like how my underwear cups them a little bit, and holds them, cradling. I like having them sucked on and played with. I like how they hang and smack against the person I’m fucking.

There are a lot of things that make Shilo’s Balls really cool. Like:

Like NYTC’s other products, the balls are silicone and can be sanitized in a 10% bleach/90% water solution, on the top shelf of the dishwasher (with no soap! Assuming that your dishwasher gets hot enough for sanitizing, check your model), or in cock soup boiling water for 5-7 minutes. It’s beautiful quality silicone, too. Mostly matte, not shiny, pliable, soft to the touch, feels good. I think NYTC has some of the best silicone offered.

Their size is excellent and matches the Shilo so, so well. They—both Shilo and the balls—feel like a good size for my body, too. Not too small, not too big.

So, in conclusion: Highly recommended if you’re interested in adding some balls to your strap-on play, regardless of whether or not you have the Shilo. It can be a really fun addition for more sensation, for gender play, or for other role play during strap on sexy times.

Pick up The Love Bump from the New York Toy Collective, or at your local awesome feminist sex-positive queer sexuality resource shop.

The Famous Lesbian Comedy Roadshow* is doing a fundraiser at Bulldyke Chronicles this Saturday, guest hosting the show, and I’m one of the special guest performers! 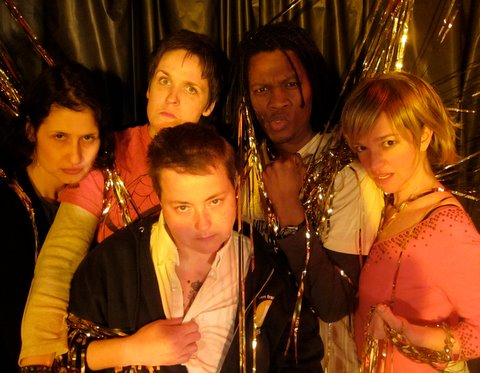 What’s that? You haven’t heard of the Famous Lesbian Comedy Roadshow*? Well you should have! It includes my Sideshow co-host and co-curator, Cheryl B., along with Kelli Dunham, Kate McCabe, Lea Robinson, & Elizabeth Whitney. They’re going on tour this summer and this is their special fundraising show here in New York. Come on out!

Silent auction, raffle, & you can have your picture taken with Officer Ruffins from Room For Cream! 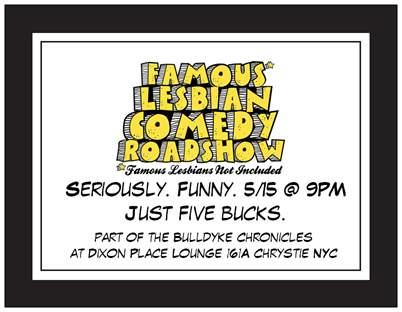 It’s April again, and you already know that means it’s my birthday, and Sugarbutch’s blogiversary. But did you also know that this year, I am the April pin-up in the 2010 Sex Blogger Calendar? 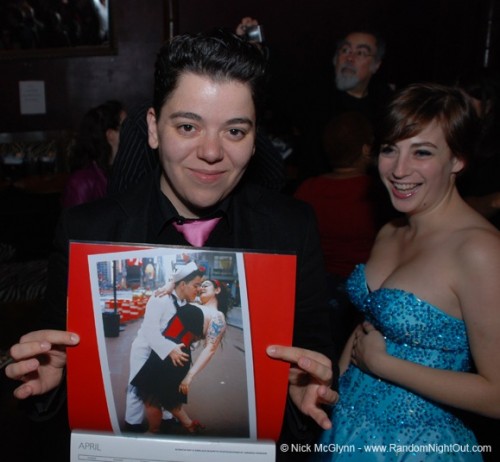 Me, my photo in this year’s calendar with Audacia Ray (photographed by Amanda Morgan), and Kristen at the Sex Blogger Calendar Party, November 2009. Photo by Nick McGlynn

I wrote about the process behind the photo and what Dacia and I had in mind when we started planning our own “vision of sexual freedom.” I still don’t have a good digital version of the photo by itself, but this shot of me holding the calendar will have to do.

Tess and Diva have graciously let me give away FIVE of these lovely calendars to celebrate my pin-up month. Want one? Leave a comment with a link to your favorite pin-up photo, or just one that you really like, or your favorite pin-up photo model or photographer (Marilyn Monroe? Dita von Teese? Hilda? Gil Elvgren? Les Toil?). Don’t worry if you don’t have one—it’s not very hard to Google pin-up photos and waste some time looking through for one you like.

Since you’ll show me yours, here are some of mine: photos tagged “pinup” from my mrsexsmith.tumblr.com log. Not my all-time favorites, but some of the notable ones from the last year or so of tumblr. Maybe I’ll spend some time adding some of my favorites!

There are not very many calendars left, but I bet if you run over to the Waking Vixen store you can still order one.

Here’s why you want one: you’ll be told of your favorite sex blogger’s birthdays and blogiversaries, you’ll get special discount codes from the fabulous sex toy companies who sponsored the calendar, you’ll get to stare at some gorgeous sex blogger’s pretty faces all year round, and, of course, you’ll be supporting Sex Work Awareness with your money.

I know, I know: I already reviewed Sugar High Glitter City! What am I doing mentioning it again? 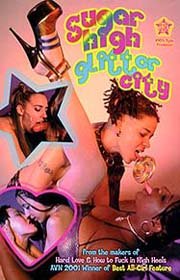 It’s the future. Sugar is outlawed. Cane-addicted dykes stop at nothing to get it – even selling their own bodies! The dynamic dyke team of SIR Video slams the dykespoitation genre into fast-forward with this sticky-fingered belly-crawl through Glitter City’s underworld of sugar-pimps and sandy hos. Fabulously diverse cast and multiple dyke sexualities crunch to the center in this fast-paced futuristic farce. Urban-encrusted glam, gutter-glitter lust, and candy-coated sleaze.

Actually, speaking of dirty talk, S.I.R. Productions also has a “Talk Dirty To Me” film, which I’ve still never seen, but that I hear HM4H will be adding to their collection in the near future. Will most certainly watch that as soon as I can, and report back to y’all how it is. 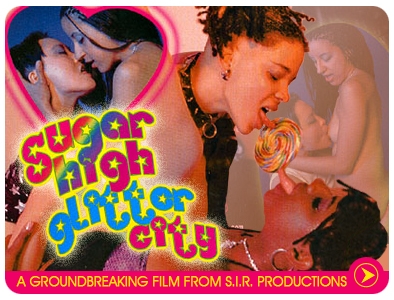