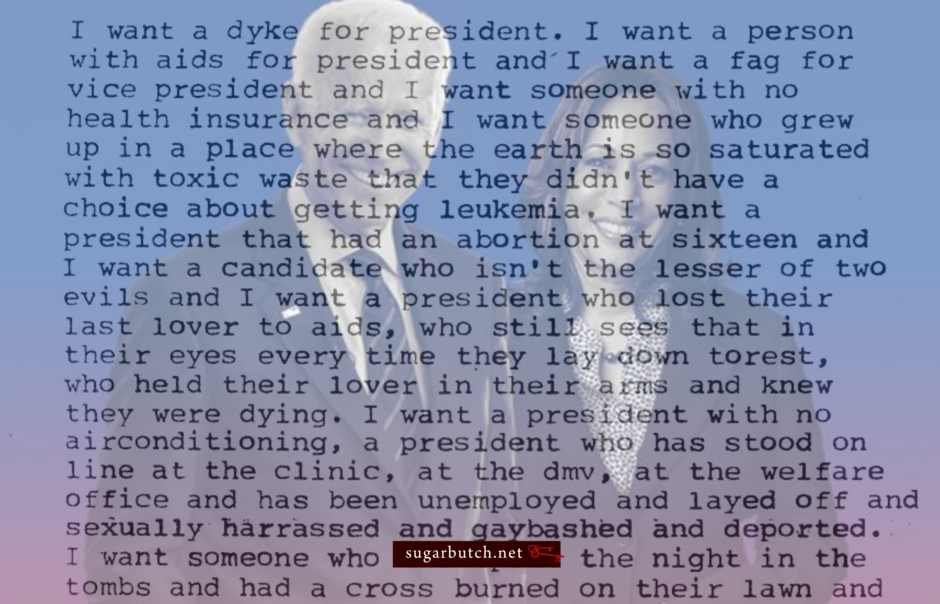 Am I excited about voting for Kamala Harris and Joe Biden? No.

Am I going to vote for Kamala Harris and Joe Biden? Abso-fucking-lutely. Of course.

Am I excited there is a Black woman as the democratic vice president nominee? Yes! I’m excited about anybody who isn’t a cis white man. That we are starting to have possibilities, options, is fantastic and I absolutely want to see more of it and I’m excited about it.

But: Kamala Harris was a police officer. I, like many folks in the past year or so, have been learning more and more about the movement to abolish police entirely, and I’m in support of that. There are many arguments about whether more strict regulating or defunding would be steps toward abolition, and some say no, that we’ve been regulating for years and it hasn’t changed the amount of killings of innocent (particularly Black) people and police brutality. And at a time like this, when the Movement for Black Lives is stronger and more active than it ever has been, I am kind of shocked Biden chose someone with a such a police history. Then again, of course he did — he’s a moderate, centrist democrat and perhaps radicals will still vote for her because of her radicalness (being a Black woman), but more conservative folks will still vote because of her police history.

Kamala Harris also had a serious hand in SESTA/FOSTA, and if you don’t know what that did for sex work and freely distributing information about sexuality in general, definitely look into it. Her history as a DA is intense and generally bad. There are many criticisms — what I’ve mentioned here is by no way exhaustive, not that I’m trying to be. Point is: there is reason to critique her.

Either way, I was going to vote for the democratic nominee. I’m not necessarily excited about it … I don’t particularly believe that the nominees for president in this country are ever going to represent my actual beliefs and values. 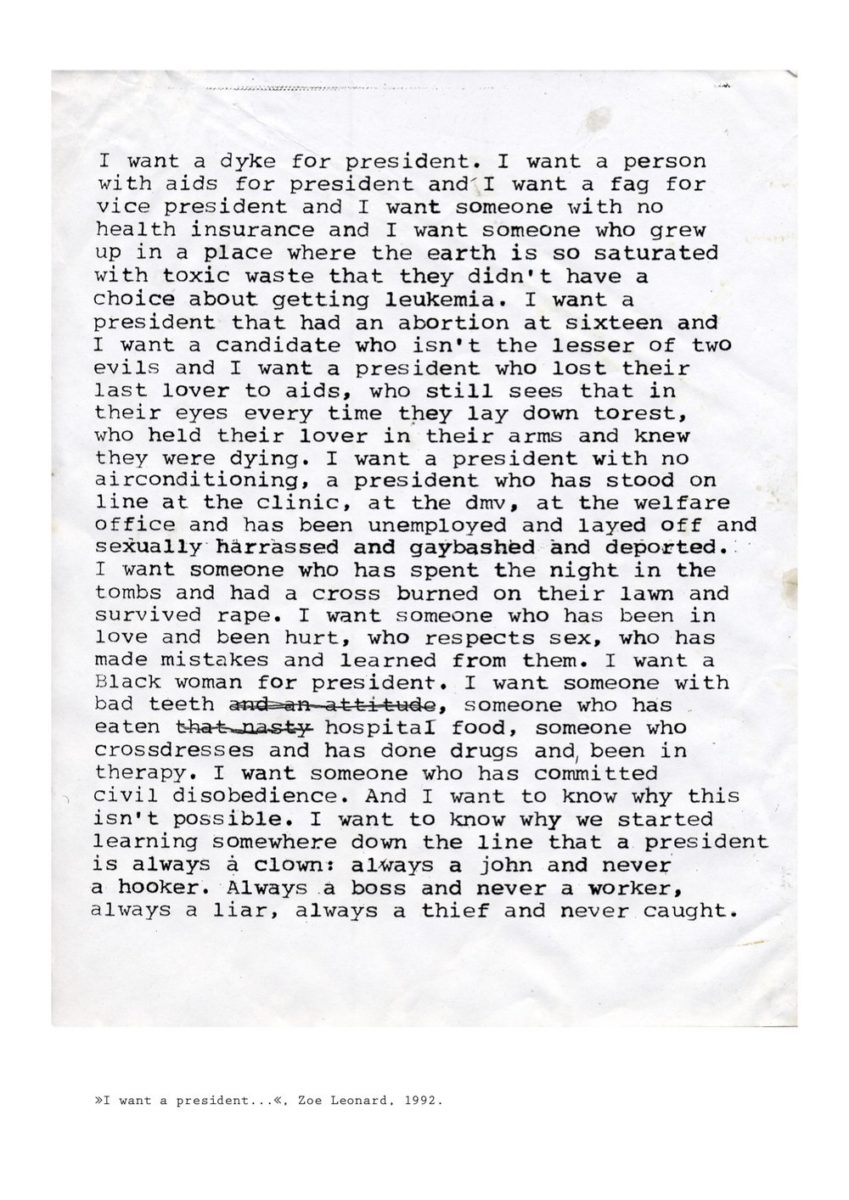 I want a dyke for president. (Image text by Zoe Leonard, transcribed below.)

Still, I’ve voted in every election that I have been able to since I was 18. I do believe it’s important.

I was talking to rife today about my frustration with the state of the world — particularly the US, but corporate greed and profit over people over the earth are everywhere, not just here. I feel angry, disappointed, and helpless — which can and does sometimes turn to apathy. I’ve heard many of my friends talk about how actually volunteering for a local election or doing work on a presidential campaign has helped them feel like their anger has somewhere to go, so I’ve definitely been thinking about that part, too — how to turn the anger and frustration outward into action rather than inward into hopelessness and apathy.

I’m curious how you all out there are doing. Are you eligible to vote? If so, are you planning to vote? Did you vote in the 2016 election? If not (and assuming you were eligible), why didn’t you? Are you disappointed that Bernie or Warren didn’t get the nomination this time around?

And perhaps most importantly: What kind of activism are you doing? How have you funneled your rage, apathy, frustration, give-up-ness into something productive?

I write about voting and politics on here sometimes, sure, but I’m not a journalist and so it’s more rare to write about ‘current events’ type of happenings. I tend to assume that everybody is seeing a lot of the same media I’m seeing, because we’re all in a similar queer feminist liberal urban bubble of media — though I know that’s not true. Internet algorithms change what everybody sees extensively. I mean, have you been saying the same things I’ve been seeing this week — the extensive essays about why Kamala Harris sucks, but the resolve to vote for her anyway? The feelings of disappointment, and the barbed wire around being allowed to feel our feelings of disappointment, asking folks not to please jump on them about feeling bad because of course we will vote blue? And the smattering of folks who are saying, simply, ‘hurrah, a Black woman’? That’s what my news feeds and timelines are all full of.

I’m thinking about how I can use Sugarbutch in the coming months, if there is anything I can actually do to support getting Biden/Harris elected. I can write about it more, I can share my thoughts as we get closer … which isn’t my favorite thing to do, because it veers close to journalism, which doesn’t excite me. But how can I use the platform AND come up with something exciting? Not sure yet, but I’m thinking about it. If you have ideas, I’d love to hear them.

Text of the above image: