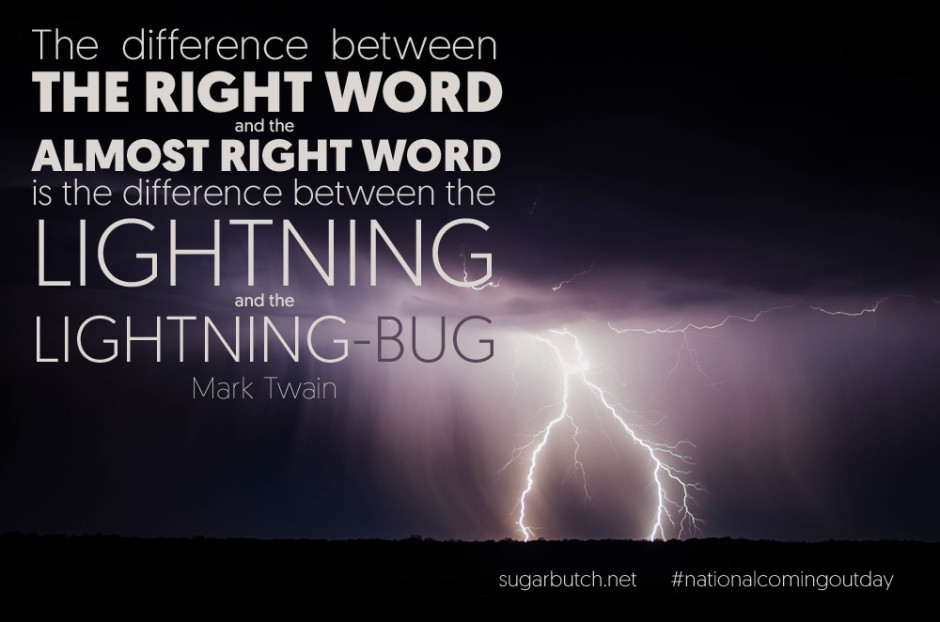 For #nationalcomingoutday, here are some words I use to describe myself and some identities that I have actively cultivated:

For a while, I kept a list of words in the back of my journal, making a note to myself anytime I heard myself say, “I’m a _____.” I would write it down and think about it, pondering if I really am that thing or if it was a passing moment of identifying as such. Some of the words that came out of that are survivor, introvert, and hedonist, as well as the more often-used social justice ones, like butch and queer and dyke and gendequeer.

There are some other words—like lesbian, dyke, and trans—that are almost the right word, and which I sometimes use and sometimes identify with, but that aren’t always precisely right.

There are a few more that are complex and I hesitate to list, like yogi and tantrika, because while I do practice yoga and tantra, I haven’t quite been able to reconcile the cultural appropriation that surrounds me with those activities enough to be comfortable to use the identity labels to refer to myself. (So for now, I go with 2nd generation woo.)

There are a few more that I aspire to, but don’t quite have yet … like gardener and runner, which are identities in progress but not quite integrated. I do have a garden (finally!!), but I frequently forget about it. And I did run two 5k races in the past two years (hurrah!) but again, that habit doesn’t feel consistent, and isn’t quite an identity yet, just an occasional burst of interest.

And what’s the word for someone who tends to be depressed, or who struggles with depression? I don’t quite want to say neurodivergent or depressive, those seem too intense. Something a little more mild that says that I tend toward internalizing emotions rather than externalizing, and tend toward feeling down rather than feeling up (anxious). Or maybe this is a case where I have to reclaim a word, or use something that seems overly harsh and is misunderstood (like depressive).

There’s a lot to think about on National Coming Out Day … I’m particularly interested in identities, and what we call ourselves, and how we claim our power in these words and communities, but I also recognize that for many people, being associated with the identities that have marginalized them feels an awful lot like being marginalized all over again.

I believe that we should find the precise right words that are big enough to contain all the multitudes of us, and not sacrifice our selves to fit into labels which constrict. I believe the identity should conform to us, that we shouldn’t conform to it. And I believe that labels and identities and words that describe ourselves should always be the starting place, not the ending place, of the conversation—a place of opportunity to know more and ask questions and listen, not a place to fill in our own assumptions and determine the truths of others.

What identities do you claim? What words do you use to define yourself?

October is my favorite month – I’m going to state it officially for the record. It’s got some significant gay activist dates, like October 11th (in the US – apparently it’s the 12th in the UK), which is National Coming Out Day, and the whole thing is LGBT History Month. And October 12th is the anniversary of Matthew Shepard‘s death.

And this year, I’m sure you’ve heard, was the National Equality March on Washington, and news about its success has been streaming through my reader all day.

Last year, on National Coming Out Day, I wrote about where I was when Matthew died (in the same city as he was, actually) and shared the poem I wrote about it years later.

I still think coming out is one of the very most important things we can do, as queers, as dykes, as butches and femmes, as andro genderqueer gendernonconforming gender rebels, as trans folks, as kinksters. Coming out claims the space we rightfully stand on, and says we accept who we are, and if you don’t, that’s your goddamn problem. Coming out is visibility, and completely overrides whatever the lesbian uniform currently is.

Whoever you are, I urge you to come out to just one more person this week, this month, this year. Come out as whatever particular identity you happen to be. Come out in support of gay rights, come out by calling your coworker on their homophobic jokes. Come out and claim your space.

I ran across this clip of Judy Shepard visiting The Ellen Show last week, on October 9, 2009. She talks about Matthew’s death, her own subsequent activism, what a hate crime is, and the amazing news of the US House of Representatives expanding the Hate Crime definition on October 8th (I know, I don’t usually report on current events, but this is important and relevant to the October Activism).

PS, check out Ellen’s short hair! It just keeps getting shorter! I would love to talk to her someday about her gender and how it’s evolving – has she always been butch, and now that she has some solid fame and notariety she finally feels comfortable expressing herself? Is it Portia’s influence? Is she a reflection of the current culture? (Seems like she always has had very timely hair.) I’m curious, I’d love to hear what she says about it. And I just love that she’s doing more gay activism through her show than she ever has.

On October 6th, 1998, Matthew Shepard was tied to a fence in Laramie, Wyoming, beaten, and left for dead – because he was gay. He was taken to a nearby trauma hospital in Fort Collins, Colorado, and died on October 12th.

I lived in Fort Collins at the time. I was not out, I was living with my high school boyfriend of five years. Nobody I knew was talking about it, aside from the brief acknowledgment in order to look away. There were protesters at the hospital. The Denver newspaper announced that he had died before he actually died.

Years later, after I was living in Seattle and came out and was building an amazing queer community, I saw Matthew’s mom Judy Shepard speak at my college. I’m paraphrasing here, but I remember a few things she said so deeply: “I’m just a mom,” she said. “I’m not an activist, I’m not a historian, I’m just a mom of a really great kid who died because he was gay. People ask me all the time, what can I do, and I always tell them: Come out. Come out everywhere, all the time. People discriminate because they don’t think they know any gay people. They don’t know that the guy they go bowling with is gay, that their office neighbor is gay, that their dry cleaner is gay. They think gay happens “over there” in big coastal cities. Until everyone starts realizing that gay people are just like them, discrimination will keep happening.”

I tell that to people a lot, especially baby dykes (or baby fags or baby queers) who are struggling with coming out. It’s our number one place of activism: to be who we are. To let the soft animal of our bodies love what it loves. It is not easy for any of us, but for some more than others, as there are still very real consequences to coming out and being out, not just with our families and parents (especially) but in our daily lives.

I was searching for some Judy Shepard direct quotes and came across this article from 2001, which relays more of the thoughts I’m trying to articulate:

Matthew came out to her at the age of 18, three years before he died. He decided in his own time and space when to tell his parents about his feelings on his sexuality and how that was important to him. After explaining how she and her husband dealt with Matthew’s coming out, Judy believes that “Your goal in life is to be the best and happiest you can be. Be who you are. Share who you are with the rest of the world.” Come out. Come out to yourself. Come out to your family. Come out to your friends. Be who you are and don’t hide in the closet of fear. Take pride in who you are through and through. […] In closing, Judy illustrated her thoughts that if the corporate world of gay, lesbian, and bisexual individuals would come out and be true to themselves, their lives, and the world we live in would be a better place. Maybe Matthew would still be here today. ‘It’s fear and ignorance that killed Matthew. If fear is shed, the violence will go with it.’ Acceptance of gays, lesbians, and bisexuals would not allow fear and ignorance to exist as hate.
– Erie Gay News report on Judy Shepard at Mercyhurst April 3 2001.

Years after I left Colorado, when I was in Seattle and studying writing, especially formal poetic forms, I wrote an acrostic poem about Shepard. The acrostic is a form you’ve probably played with as a kid, at least – you take a word and make each letter in the word the first letter of the line of the poem. In this case, the assignment was to write an acrostic about a place, capturing both the essence of the geographical space and an event that occurred there. The title is a reference to the date he was attacked.