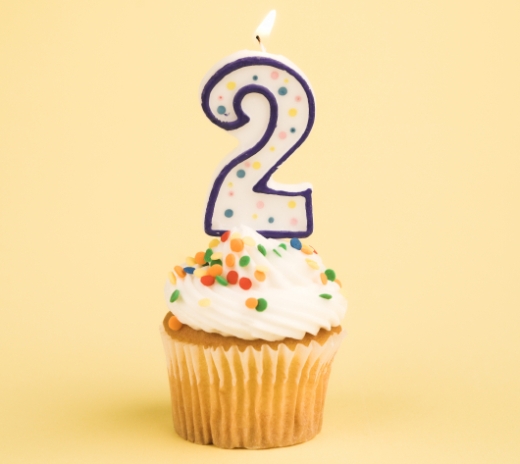 Today celebrates the second anniversary of the beginning of Sugarbutch Chronicles. Two years ago, I was stuck in a Lesbian Bed Death relationship and felt like I was withering away – we were together four years, and we’d had sex five times during the last two.

That relationship is why I started writing smut. I had to do something with all the sexual energy built up, so I decided I’d either a) write it down or b) go to the gym, and while I did develop a nice workout habit, the smut started growing more and more.

I’m not exactly sure how I let it get as far as it did – I can’t ever imagine letting it get to that place again.

It wasn’t until Callie came along that I was shocked out of my complacent unfeeling depressed stupor and back into a sensual, feeling reality. I’ll always be grateful to her for that. For the six months Callie & I were together, this writing project turned into two main things: writing about the sex Callie and I were having, and then processing through the difficult emotional “conflicts” that kept coming up. I didn’t have community in New York when we were together, so I had very few friends to go to and talk to about her. Sugarbutch became a major outlet for my psychological explorations of our relationship.

But after that ended, it became something else: exploration of my single sex life, mostly. And as that has developed into something more intentional and less, uh, free-for-all, I’ve been writing less about my own personal dating and sex than I am about gender and sexuality in general.

Going into Sugarbutch’s third year, that’s the general direction I’m going to continue to aim. I’ll still going to write about my own personal processes and developments, but I’d like to focus on more personal essay styles with distinctive reoccuring features (like eye candy) and, of course, smut.

Is there is anything specific you’d like to see more or less of? What’s most useful to you here? What’s least useful? What do you love, what do you skip over without reading? If you have ideas, if you have general praise or critique, I’d love to know.