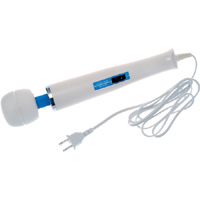 I’ve been putting off this review for awhile. Sin asked me for a draft and I said, “Five words: nothing compares to Mr. Sexsmith.” Which is true, but there are occasions where I need to get myself off. So as a substitute, I’d say the Hitachi Magic Wand is adequate but not life-changing.

At first I wanted to use it three or four days in a row, to test the theory that it would numb your clit with repeated use. But that test didn’t happen. The electricity in my subleased bedroom didn’t work for a week – seemingly irrelevant to this review, but it reinforces a basic problem with the Hitachi: it’s not as reliable as my hands, which are available and functioning 24 hours a day.

I’d used a Hitachi before, somewhat warily. As you might, um, already know, I come easily – “You just need a stiff breeze,” a friend joked recently. I like that about myself and I don’t want it to change. I don’t want to be so accustomed to high-power humming on my clit that I can’t get off any other way. That said, the two or three times I’d borrowed Sinclair’s – we’re fluid-bonded, people, it’s ok – I kind of liked it. And by that I mean I came in seconds and wanted to keep going.

But actually owning a Hitachi is different, and I worried it would become the guaranteed-get-me-off machine. I want to be able to get off when it really counts, i.e. when Sinclair’s fucking me. So I used it once, when Sin was out of town, and it, um, worked. I used my fingers first, had a quick orgasm, got myself wet so I’d feel the vibration a little better, and went to town. I found that the first couple of orgasms came easily from the low setting, but I thought I’d try the higher setting to see if I could handle it. Some people find the high setting is too intense, but after the first few times I came from the low setting, I wanted more – and I could handle it just fine.

And then I brought it with me on a trip out of town – and didn’t use it. I think I wanted a more prolonged, less intense orgasm than I felt it could give me – I wanted a long, slow build instead of a burst of pleasure. That’s not to say I couldn’t have a massive orgasm from a Hitachi, given the right conditions (long, hot fantasy on an afternoon by myself; Sin using it on me while I’m tied up and can’t protest). But nothing beats my hands for a solid 45-minute jerkoff session.

6 thoughts on “Kristen reviews the Hitachi”