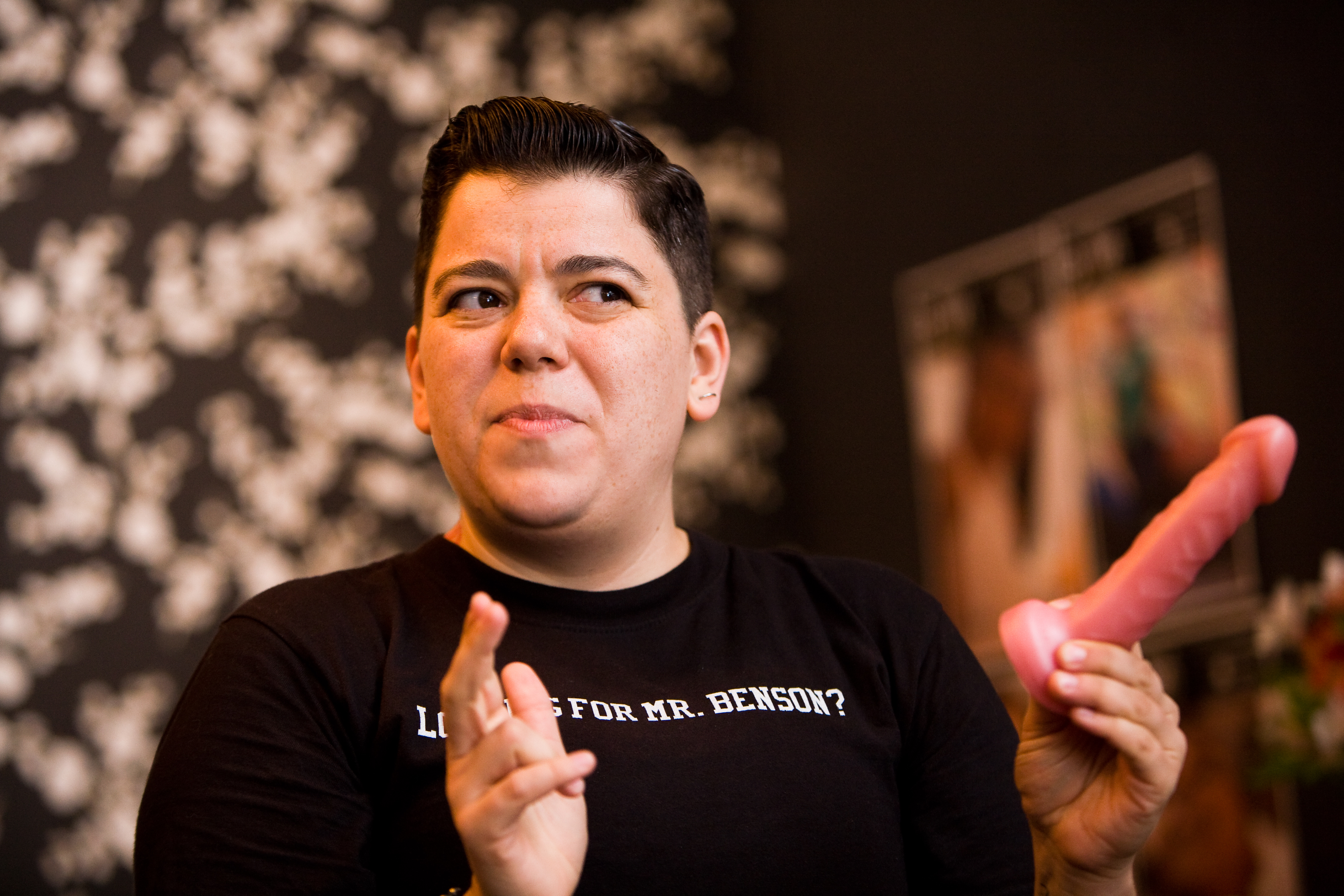 I have a soft packer, which I can carry around in my briefs with no problem. But, when strapping with a cock like Maverick for later use with my girl… it was so uncomfortable because of the way it was pressed down or upwards and the pressure from the base of my cock (which now was at an angle) on my pelvic bone left me sore and bruised. Plus, it looked like I had a huge hard-on. My pants were fairly loose, but it was so obvious that ‘something’ was in my pants… I was very self conscious that it looked like I had a boner and it was extremely hard to relax. I even went so far as to wrap the thing with an elastic bandage around my groin to hold it down. Every time I sat down…pain from my skin being tugged by my cock and the bandage pulling it away from the strap. Not to mention the inconvenience of having to ‘unwrap’ so we could fuck in a bathroom… I have even tried Silky (minus the bandage) by just bending it up or to the side(still looking like a hard-on), and once again, the base doesn’t sit flush when bent and puts a lot of pressure on the pelvic bone. It sort of takes the fun out it, which sucks, because I really having my cock with me and ready to go.

Is hard packing comfortably a fine art or is there really a trick to it?

Thanks in advance!
WrencHer

Yeah, I hear you there. That’s like the #1 issue of packing, nobody’s really invented a cock that is soft enough in your pants and hard enough to fuck with yet.

I totally know what you mean about packing with something hard and having the pressure dig into your pubic bone, ouch. That does happens to me sometimes. Packing is a bit of a fine art, might just take a whole lot of trail and error. I pretty much only ever pack with either a) packers, soft and not made for fucking or b) Silky/Bendy. The harder/bigger ones like Maverick just don’t work, in my experience – VERY rarely I’ll put one on before I’m at home watching a movie or something, but that’s for when all I’m wearing is boxers and nobody can see me (’cause hello, tentpole!).

I’ve been packing with Silky/Bendy for like four or five years now I guess, and I’ve figure out the angle pretty well for that one so it doesn’t dig into me anymore, I can wear it around easily for a day. I do have to readjust sometimes, but generally I can get it to stay put. I guess having it really tight in the straps around my waist helps, so then it doesn’t shift or move around, but then I keep the straps between my legs looser.

What kind of harness are you using? Maybe try a different one, that might help? I definitely think Silky/Bendy can pack comfortably, so it might just take some more practice. There are two that seem to be the most popular and recommended: the Jaguar (leather, though they also have a vegan one, by Aslan) and the Joque Spare Parts. The Joque & the Jaguar are not my personal favorites, actually, mostly because I really prefer the one-strap harnesses, though it seems like these are favored by most people. Personally I like the commando, and also the Jaguar G, which is the G-string version of the same Jaguar. The leather is SO beautiful and soft and buttery and I just love the design, super comfortable and incredibly hot.

Same with the cocks, it’ll be about a $100 investment, but Aslan Leather (and some of the other nice harness makers too) come with a lifetime guarantee, like Vixen does, so the investment is totally worth it.