A few weeks ago, when one of my oldest and dearest and favorite-est friends, BB, was in town visiting, Kristen and BB and I had a night at home and sat down to watch a film. Having recently discovered the joys of both Paperback Swap and Swap A DVD, I have some DVDs that I haven’t seen in quite a long time, if ever.

Black Snake Moan was one of them, and we decided to put it on.

It sure doesn’t seem like a feminist, conscious film on the surface—it seems fucked up, about gender, race, and sexuality. Why would I want to see that? Why would I like that? But it’s more complex than it seems.

Here’s the basic premise: Rae (Christina Ricci) has an extreme sexual appetite. Rae’s boyfriend, Ronnie (Justin Timberlake) is off to the army and while they usually keep each other sane and balanced, she is losing her control and getting in dangerous situations, such as getting completely intoxicated, half-naked, and then beat up by a guy she occasionally sleeps with. Lazarus (Samuel L. Jackson), whose wife just left him for his younger brother, finds Rae unconscious on the road near his house and brings her inside, attempting to nurse her back to health. She, though, has all sorts of night terrors, which cause her to run around and scream—while pretty much still unconscious—so he chains her to the radiator. But when she comes to, two days later, he doesn’t unchain her, but decides she’s not healed yet.

I know, I know: I want to start yelling, NON CONSENSUAL! You can’t do that! But the thing is … she’s out of her mind, a little bit. I know it sounds like shaming a woman because she likes sex, but frankly I don’t think that’s what’s behind this. It isn’t that she likes sex too much, it’s that she is destroying herself through her pursuit of sex, which is clearly depicted as compulsive, and absolutely not something she is choosing from an empowered place.

Ricci is bone-thin in a very unattractive way, she looks so strange sometimes, so unlike her for this role. I wanted her to come over so Kristen could feed her baked goods and get a little bit of that glow back. But she plays the role amazingly—I even read a critique that said it was the highlight of her acting career. And Jackson is genius! I love the scenes where he’s playing the guitar and singing, the blues just dripping off of him. Healing music, no doubt.

All through the re-watch I kept thinking, why is this okay? Why is this not totally fucked up? Because it seems like it should be, on the surface—but it’s not, and I love this film. Maybe it’s because it’s so well written? Or well acted? Or well crafted, in general? I could go on and on about the layers of this film and the dozens of ways you could interpret the character’s actions (the Christian angle; the sex is bad angle; the men as savior angle), but really what I want to do is encourage you to see it for yourself, if you like to think critically about consent, feminism, character, and kink.

And oh yes, it is kinky. All the stuff with the chains, well … 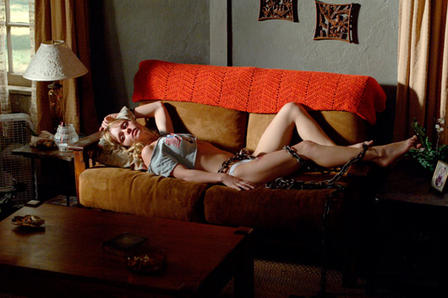 I love the way she becomes attached to that chain. There is a part, after she regains consciousness but before she’s healed, where she consents to stay. Where she kind of doesn’t want him to take the chains off. And another part (in that photo, above) where she comforts herself with the weight and restriction of the chains, in part to get through her own triggers, and to break the automatic reactions in which she’s been stuck.

I would argue that hits on exactly what she needs: containment. Not in a repression kind of way, no, but in the tantric sense, that she is all energy and river and no riverbank. (Interesting, though, how she is able to be that container for Ronnie, as stated from the very beginning of the film when he says she saved him, onto the last scene.)

Plenty more happens in the plot after that: Lazarus teaches her things about life and living, she confronts some demons (including her mother), we get some abstract insight into the things that have been haunting her, and she seems to come to a stronger, more capable place. Personal growth, healing from trauma, and breaking through her own samskara: makings of a good film, if you ask me. 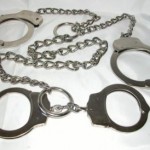 Well, Kristen liked the chains. She has a thing for metal, more than I do I think (I’m more of a leather guy myself—not that I’m opposed to chains). I had, I remembered, received Metal Wrist and Ankle Cuffs from Sextoy.com that I’d never reviewed, nor had we, in fact, ever even used them.

I thought it might be time to break those out.

Yeah, so that was a good idea.

That image is from Griffin Leather & Metal, not the actual cuffs that came in my set. Mine are not nearly as gorgeous as these, but that’s basically how they’re set up. And the photo on the box that mine came in is pretty awful, it is something that would have steered me clear of buying it.

But in fact, it’s very much worth having around.

They’re relatively cheap, but they’re sturdy, and they don’t feel like they’re going to break (unlike some of the other bondage toys I’ve occasionally reviewed). The chains could be a little shorter, especially the chain connecting the wrist cuffs to the ankle cuffs, but that also might be because Kristen is kind of short, so perhaps with someone a bit taller they would be the perfect size.

Those dimensions don’t seem quite right (longer connection between the feet than from the feet to the hands?), but that’s what the website claims.

And I’d like to tell you all about what we did when we played with them, but the truth is, I can’t remember the details. I don’t know how it started exactly, I don’t know how it ended. I don’t remember how I put them on her, but I do remember holding on to the chain, choking up on it so she couldn’t move. I remember telling her to get up and walk to the other side of the bed so she could look in the mirror. I remember watching her touch herself for a while, while I watched. And I may have snapped a few photos.

I’m still thinking about this film sometimes, even now, two or three weeks later, and looking forward to watching it again.

I’m not going to write a blow-by-blow account of the film and all the complex, phenomenal moments (like, “You’ll have to ask the chef.” “Paprika.” And everything about the characters of Miss Angie and Ronnie both), or an elaborate argument on why it might border on offending my feminist sensibilities, but doesn’t actually. I’ve enjoyed the extensive conversations I’ve been having with Kristen about the film since we saw it, and I’m looking forward to seeing it again.

Have you seen it? What did you think?

If you haven’t, perhaps you’d like to watch the trailer for the film, and see if it’s something you’d try out. I was skeptical, but it is much more than what it seems.

4 thoughts on “Chains and Containment in “Black Snake Moan””