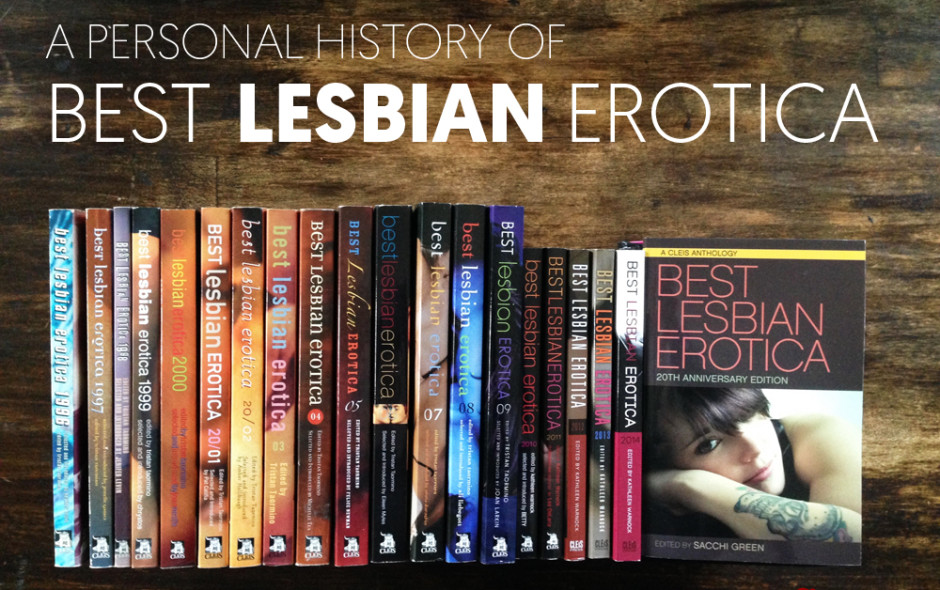 Best Lesbian Erotica 20th Anniversary Edition is out now, and I’m part of the blog tour editor Sacchi Green has organized on it’s behalf. The story of mine that is in this collection, Luscious & Wild, is here on Sugarbutch already, so I thought I’d take you back into the Best Lesbian Erotica series in celebration of it’s 20th.

Personally, I started collecting them in 2001. I fancied myself a lover of smut and a sex-focused person, but frowned at my itty bitty erotica collection at home. So I started frequenting the lesbian erotica section of my favorite used book store, Twice Sold Tales, on Seattle’s Capitol Hill, which was an equally itty bitty shelf near the floor. The ‘Gay and Lesbian’ section towered in the shelves above it, but I was looking for the bottom-shelf stuff. The dirty stuff. I bought every edition I could find, eventually filling in my collection by ordering the few volumes I was missing online, and still order the newest edition the minute it comes out.

The series now spans 20 volumes with as many different guest editors. It can be hard to pick just which ones to read, or where to start. So, here are three of my favorites. 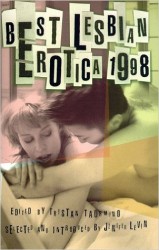 The first one that got me really hooked was Best Lesbian Erotica 1998. The story by Karlyn Lotney (also known as Fairy Butch, if you remember On Our Backs and other late 90s sex/dyke activism) called “Clash of the Titans” remains one of my favorite erotica pieces ever, and blasted open what I thought erotica could be or do. For example, it could be complex emotionally, it could contain activism and politics, it could show switching, it could show vulnerability. Not that I didn’t know that, exactly, I just didn’t … realize it until I read this story, and this whole book. (I wrote about it in this week’s new View From The Top column, titled The First Time I Knew I Was A Top.)

She cut a swath through my flat like Moses parting the Red Sea, and made me feel like a man: all big and dumb and panting. I felt my internal butch cock harden and start its invisible levitation, and the part of my brain that concerns itself with floral arrangements, oranges, and perfect living rooms fell away. Another part took over, the part that found its genesis in my father’s collection of late sixties’ issues of Playboy, benches two-ten, and answers to “Daddy.”
—”Clash of the Titans” by Karlyn Lotney, from Best Lesbian Erotica 1998

The other piece that made me speechless (and come) was “Ridin’ Bitch” by Toni Amato. That story—that includes a hard femme who jacks off a butch’s strap-on shamelessly while they ride from the bar to the butch’s apartment on a motorcycle—was part of what completely convinced me that I loved strap-on sex. 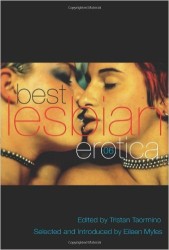 Best Lesbian Erotica 2006 included the first erotica short story I ever published. I have read that edition over and over, mostly because my story is in it, and it thrilled me to no end to see my name in print. (It’s under my legal name, by the way, not under Sinclair.) 2006 was the year I started Sugarbutch as well, but that actually came after this publication was accepted, and I thought Sugarbutch would be a little private side-project, not become my next big thing.

BLE ’06 also includes a beautiful story by Peggy Munson, and one of my absolute favorites by S. Bear Bergman, called ‘Silver Dollar Afternoon.’

I fall in love with her when anyone asks her why she doesn’t wear her beautiful long hair all the way down and she says, with just a hint of coolness: “A woman’s hair is for her husband,” which makes me remember every time she has unpinned her hair for my delighted eyes and even if I’m not quite a husband I still shiver in my blue jeans without fail.
—Silver Dollar Afternoon by S. Bear Bergman, Best Lesbian Erotica 2006 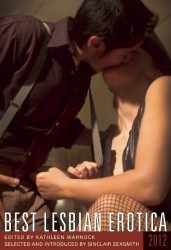 The 2012 edition is probably my favorite, but that’s because I’m the guest editor and so I got to pick all of the stories. I actually went back to Kathleen Warnock, the series editor then, to request more stories after I read all the picks she’d sent me and I didn’t have as many as we needed. They just weren’t dirty enough—she’d picked me really good stories, with characters and plots and development and such, but I want that AND a really excellent, dirty, kinky sex scene. It is largely butch/femme heavy, but I tried to get a good mix of other character types and pairings in there, too.

The introduction that I wrote for Best Lesbian Erotica 2012 is about why lesbian erotica is valuable activism, and it’s here on Sugarbutch if you’d like to dive into my thoughts on that more.

These books of lesbian erotica are not fluff. They are not nothing. They are not frivolous or useless. For queers coming out and into our own, they are a path.” —From Why Lesbian Erotica is Valuable Activism 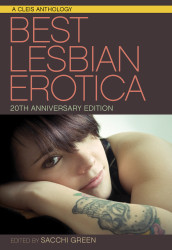 Since Tristan Taormino left, the series has gone through a few different editor’s hands, and I’m excited that Sacchi is responsible for this one. She’s edited many of my favorite lesbian erotica anthologies.

Thanks to Cleis Press for keeping this series going all these years!

I highly recommend picking up a copy of Best Lesbian Erotica 20th Anniversary Edition at your local queer, feminist, women-centric, activist-oriented bookstore, or, only if you must, from Amazon.

Here’s the rest of the blog tour, which features the different authors in the book and our story titles. Click around & follow along!

PS: Comment on any of these posts for a chance to win a free copy of Best Lesbian Erotica 20th Anniversary Edition. The drawing will be held by February 28th and the winner announced by March 5th.

12 thoughts on “A Personal History of Best Lesbian Erotica”