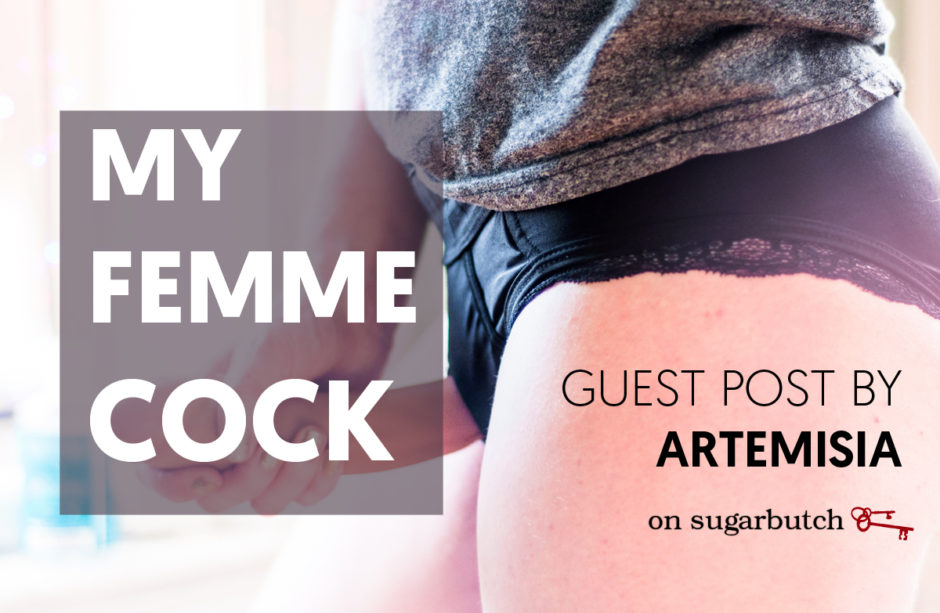 I used to think I wasn’t gay enough to have a cock.

I cringe at that now, wondering what the hell it even means to be “gay enough” for anything. My 16-year-old self had some very ingrained assumptions though, assumptions that formed an identity radically different from the one I inhabit so comfortably today.

It seems natural to introduce myself as a “queer femme dyke” now, but to my newly-out teen self, those were three very incongruous things: queer was a slur, femme was the counter-identity to masculine, and dyke was a term reserved for only the most visible, butch lesbians.

These were conclusion influenced by the community I found when I first came out as a freshman in high school, a community that assured me I was a lesbian without ever asking because I am a cis woman attracted to women. It was like a scratchy, ill-filling sweater, but amongst the many other discomforts of high school, it was warming to feel welcome somewhere.

However, this meant that an identity was crafted for me before I could even begin to claim one for myself. Part of that identity was my presentation as a femme woman who was dating a butch woman, which coded me as the submissive and receptive partner, while they were perceived as the dominant, the pleaser, the one who wore the strap-on.

We were swathed in binary stereotypes by others, queer or not, and there were endless jokes about how gay my partner was for being a visible butch woman. The most vivid being when a group of friends attempted to quantify our collective “gayness.” It was decided that my partner constituted two whole gays, while I could only claim one half. I don’t like math to begin with, but when that math is based on the idea that sexuality can be calculated from one’s appearance, I really don’t like math.

I played into this role of “half gay” though, laughing along with jokes that dismissed my sexuality because of my femininity, about being hit on by men or asked if I had a boyfriend because I didn’t “look gay,” and accepting generalized assumptions about my relationship and sex life.

I was so compliant because many of their assumptions were true: I could have had a billboard above my head that read “I’m fucking GAY” and I would still hear the dismissive rhetoric “but you’re too pretty…” and “are you sure?” In my relationship, I was submissive and my partner was dominant, I chose the cock but she always wore it, and she didn’t enjoy being penetrated while I did. Presentation and sex became linked in my mind, and I conceded to the stereotypes.

It wasn’t until I went to college and saw unabashed, gender fucking, non-binary femmes that I began to see my identity as more than half: the half gay, the receiving half, the other half of butch. I started to understand that my presentation isn’t complimentary, it’s individual and multi-faceted. I can like, do, dress, and fuck however feels right to me. So I took off the itchy sweater and all the assumptions that were pinned to it.

I found a partner who has shifted and changed with me over the past two years, and though our journeys of sex, sexuality, and presentation are undeniably different, we’re able to express our needs and wants in dynamic ways. For so long, I just didn’t have the language or references or support to communicate in that way, and a large component of my shift in understanding is centered around exchanging that sweater for a strap-on. 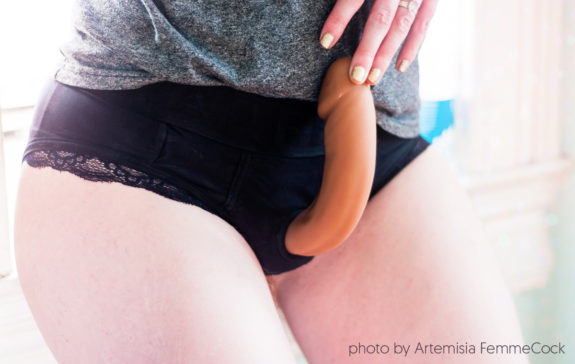 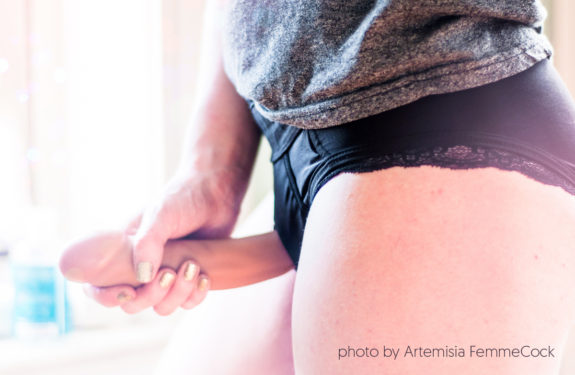 My first cock was a milky pastel pink that coordinated so well with my mint and pink lace harness. When I put it on, the wispy hairs on my thighs, two chubby bumps for knees, and slightly pigeon-toed feet all defocused, obstructed by that new view. I began to bob and sway as my hips swung and my legs lifted off the ground. I danced around in my new naked, the weight of my cock against my pelvis, brushing my skin as I shook and spun. It was like the queerest tampon commercial dance montage you’d ever seen, and I would have gladly accepted a trampoline to complete the image.

There was reclamation in that cock, feeling my queer femmeness in something that I had known as a symbol of masculinity and dominance. That was years ago, and since then, wearing a cock has become an ever present part of my life. Literally, it’s in my name, but it’s also my identity. Albeit, a very condensed identity, but it took me years of unlearning a selfhood formed by others in order to get to the point where it seems comfortable to join “femme” and “cock” together in a declaration of who I am.

5 thoughts on “Femming the Strap-On, Guest Post by Artemisia FemmeCock”