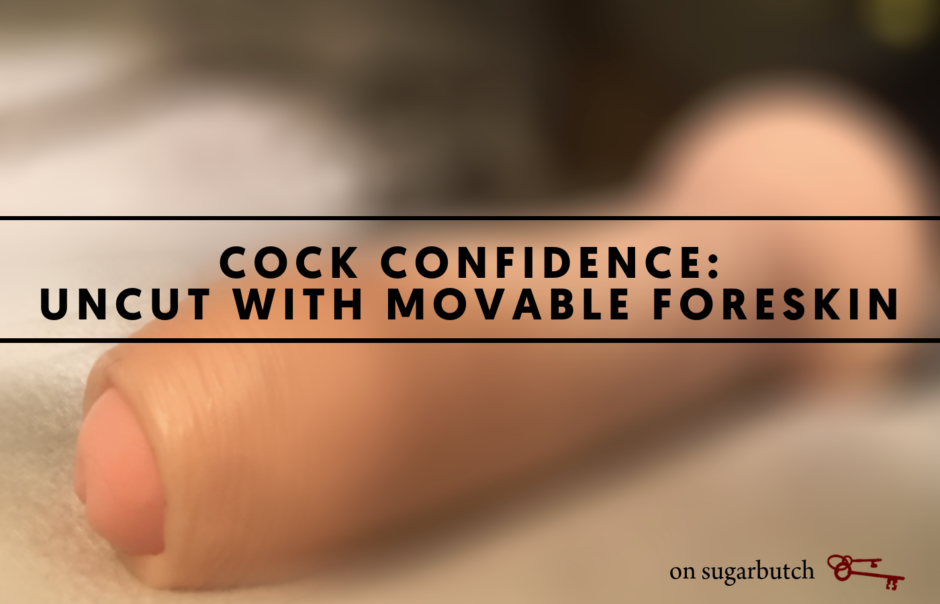 So, of course, I leapt to purchase it.

It’s called King Cock Uncut, and it’s made by Doc Johnson. It comes in 6”, 7”, and 9” versions, in the colors vanilla, caramel, and chocolate (which have become fairly standard for realistic strap-ons). The width varies by size — the 6” one is about 1.5” wide and the 9” is 1.8” wide.

She Vibe has it in stock with the various options. (It’s actually hard to find at other feminist/queer sex toy stores, because they usually don’t carry this kind of material.)

First, Let’s Talk About the Material

I was really excited when it arrived, even though when I took it out of it’s package, it smelled highly of plastic off-gassing — always a red flag for me. It is touted as being “phthalate-free, latex-free, body-safe, and hypoallergenic,” and while I believe that, their approximately $30 price tag tells me that the plastics they’re using are still not particularly high quality. SheVibe calls the material “Phthalate Free Fanta Flesh PVC.” I’ve had mostly bad experiences with PVC, especially because of the smells.

What is off-gassing, you ask? Well, it’s when manufactured items release volatile organic compounds (VOCs) and other chemicals, mostly detectable by smell. They usually undergo their most noxious (and smelly) off-gassing for about a month after they’re produced; some chemicals can emit VOCs for years. (Source.)

This material, by the way, cannot be disinfected, meaning it won’t clean by boiling it (the heat would probably disfigure it). It is porous, so it shouldn’t be used with multiple partners. If someone has sensitive skin, I do not recommend it.

Okay, but: sometimes a toy has other features that might make it work using a less-than-ideal material.

And this one? It’s special!

But It Has Foreskin!

Aside from the off-gassing, the first thing I had to do — of course! — was slide the foreskin. Wow: it did not disappoint. I was really excited about this when it arrived!

I washed it a few times, set it out to dry, but the smell didn’t change much. So I left it in a drawer for a while. Usually off-gassing diminishes with time, so I figured it would calm down. I wasn’t about to stick that in my mouth, and if I wouldn’t put it there, there’s no way I’d put it in a body (mine, or anyone else’s) in other places.

Time did help it be less scented, a little bit. When I took it back out a few months (yes, months) later, it still had a strong plastic smell, but not as intense.

Unfortunately, what it also had was stains from being next to a black leather harness in the drawer. Not a lot, but definitely noticeable, and not particularly attractive. I wouldn’t say they look like bruises, but they look messy, like patches of soot, maybe.

By this time, it was much harder to slide the foreskin. It was sticky, and required quite a bit of arm muscle. I added some lube underneath the layer of foreskin, and that helped, though it still wasn’t nearly as smooth as it was before.

But What About Actually Using It?

Reports on the experience of using this strap-on have varied. Some folks weren’t bothered by the off-gassing smell, or perhaps theirs were not quite as strong as ours. Some said the smell was enough to put them off of it for good. Some were impressed with the foreskin, others though it wasn’t nearly as cool as they expected.

It has limitations, and yeah, maybe it isn’t quite as cool as it’s touted to be. But for what it is, it’s pretty fun — and unique.

The skin doesn’t really slide easily when it’s used. It wouldn’t make much sense for it to slide when it’s in someone’s mouth … it just takes more pressure and grip than would be comfortable or natural for a mouth to do. Same with being inside other body holes; the skin doesn’t move without the right kind of grip, so it won’t pull back just from going in and out of someone’s body.

So if that’s what you want, you probably won’t get it.

I’m not sure why that’s important, personally. I don’t need it to slide while I have it strapped on — I don’t know if you know this, but I can’t actually feel that part. So really, I just want it to slide while it’s in my hand, or while I watch someone else’s hand on it. And that it does, and does well.

rife reports that it is a really good size and shape. It’s a little fat, not very long. It’s very soft — they describe it as “proprietary dual-density Slide-Skin™ formula.” The dual-density is softer than many of the others on the market, and it might be even more squishy because of its additional outer layer. rife also reports that it is “not pokey” like others can be, and expressed that he really liked it. (I was surprised to hear that, to be honest!)

The Care & Cleaning of King Cock

Because it is PVC, it is porous, and cannot be fully disinfected the way other silicone, metal, and glass toys can be. It can be used with a condom, but that changes the way the foreskin moves, which is most of the point of this toy.

It can’t be boiled without damage, but it should be washed with warm water and mild soap before and after use.

As you can imagine, it’s very hard to clean. The skin peels back a little, but the piece of PVC that makes up the foreskin is actually a sheath that goes very far down the length of the shaft. It’s possible to get a small brush down in there, but lube is sticky and can be tricky to wash off without some care — and some direct soap.

King Cock was not sent to me for a review; I purchased it myself. Get it over on SheVibe.