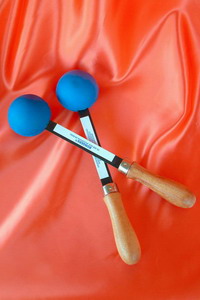 If you have ever stopped by one of Babeland’s brick-and-mortar stores (Seattle, LA, New York in Soho and the Lower East Side, and now Brooklyn!), you’ve probably played with the bongers.

They seem to be one of those non-scary toys that folks early in their sex-toy shopping tend to gravitate toward, probably because they’re unique, and at first you think “oh my god, does that go up my … ?” But then you find out they’re just massagers, whew, and start bonging the person you brought with you on this wonderful sex-toy outing, or you start bonging yourself.

I’ve seen the bongers at Babeland for years, and often pick them up, often thought, “oh that’d be nice to try out,” I do like giving and receiving massages, but I never bought a pair. They’re $25, and I don’t usually have an extra $25 hanging around for something that seems non-essential like Bongers. (Especially when I’m in Babeland and every $25 is already planned to go toward some hot cocks or leather or supplies.)

I brought these home recently and I gotta say, I really love them. No, they’re not so kinky really; even in the context of a sensual lover’s massage, they’re kind of unsexy with their bouncyness and being round balls on the end of sticks.

But they feel amazing. No really, amazing!

It took me a while to warm up to them though. After a few weeks of keeping them in my room and feeling unsure what I would even do with the bongers, I brought them out into the living room when my sister and her boyfriend were hanging out, watching tv, drinking some wine.

And oh we had a blast, once we got into them. “Do me now!” “These are so great, my hands aren’t nearly as tired as when I do a usual massage.” “Wait I can’t quite reach you like that … ahh perfect. They take so little effort to use!”

“I wonder if the kitties would like the bongers?”

And yes indeed, they really do. We leave the bongers under the coffee table now, and often get them out when we’re unwinding, relaxing after our long city days. And when the kitties start hearing the bonging noise, sometimes they come running, I’m not even kidding.

Tess at Urban Gypsy brought her bongers to work … I bet my coworkers would get a kick out of ’em, for sure.

So these might not be the sexiest toy that at Babeland, but it is always an improvement for your sex life to be more relaxed, more calm and connected to your body, right? And if you’re the kind of person who particularly likes to use massage as foreplay, to get connected to each other’s bodies and to relax your own muscles, then this tool could be a really great addition to your toy arsenal.

Me, I think I’ve just found my holiday gift. Bongers for everybody! My parents would love ’em, my relatives, maybe it’ll be what I bring to my holiday exchange at work too.

A particular place that I really recommend: the bottoms of your feet.