This is a series (1 of 3) of trailers & write-ups about documentary films about gay marriage. There is a lot of information out there, a lot of activism happening around this issue, so much organizing. I’m getting overwhelmed researching it all. I’m trying to pass on the best stuff during this 8 Against 8 campaign.

I Can’t Marry You film trailer: 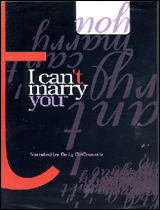 The 2003 documentary “I Can’t Marry You,” narrated by host Betty DeGeneres, explores same-sex marriage issues through the personal experiences of twenty gay and lesbian couples who have been in long-term relationships of 10-55+ years. Their poignant and powerful testimonies put faces to, and actual examples of, the painful impact of discrimination on our daughters and sons, sisters and brothers, parents, aunts and uncles, loyal friends, coworkers and tax paying neighbors.

This one-hour program features interviews with:
The twenty couples, their parents and children; Evan Wolfson, the prominent civil rights attorney of Freedom to Marry; John J. McNeill, Former Jesuit Priest and author of “The Church and the Homosexual;” Adam Aronson, of Lambda Legal; and the leaders of the New York Christian Coalition.

Filmmaker, Catherine Gray created this documentary to educate her own gay constituency about the importance of having these rights and to show us that gay and lesbian couples can have healthy, committed long-term relationships. She believes that education is the only way to affect change and win this civil right.

Our film debuted in New York City at the GLBT Community Center to a sellout crowd.

“I Can’t Marry You” would not have been possible without the support of many individuals and organizations who gave their support, including: Human Rights Campaign, GLAD and Marriage Equality. Unfortunately, until the laws in our country change, marriage for same-sex couples is still a dream.

—
I haven’t actually seen this film – if you’ve seen it, please do leave a comment and what you thought about it, or write it up on your blog and leave a link.

8 Against 8: 8 lesbian bloggers – 8 days – raising as much as it takes to defeat Proposition 8 in California. Vote NO on Proposition 8!

One thought on “8against8: I Can’t Marry You (documentary)”