Here’s a brief little break in the political activism of this week to bring you a small announcement about a (free!) film screening TOMORROW in Los Angeles. Might be just what the doctor ordered to get our minds off of politics for a minute, eh? 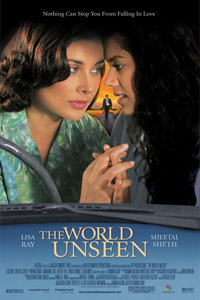 The World Unseen is “an amazing story of race, love, and strength set in 1950’s South Africa.” The synopsis is as follows:

In the pressure cooker of apartheid South Africa, two women meet and their worlds are turned upside down. Miriam is a traditional Indian mother – hardworking and self-effacing. Amina breaks all the rules by driving a taxi and setting up a cafe with a local black man. In the face of outraged disapproval, their friendship flourishes. But the price, for Miriam, is the discovery of impossible truths about her marriage. In a system that divides white from black, black from Asian and the women from men, what chance is there for an unexpected love to survive?

More information on the film – including some beautiful, beautiful stills of the film – at www.theworldunseenmovie.com

The film is screening in LA tomorrow:
Thursday, October 23 at 7:30PM
Regent Theatre (614 N. La Brea Ave), Los Angeles
Shamim Sarif , the writer/director, and Sheetal Sheth, star of the film, will be at the screening to do a Q&A following the movie.
If you’d like to attend, RSVP to 310-967-7286

See more photo stills from the film, they look just beautiful. I’m excited to see it! Fans of queer/lesbian films might also recognize Lisa Ray – one of the leads – from Water, which is also fantastic.