First, I have to confess, I have completely misplaced the Crash Pad #4 DVD that Blowfish sent me. I keep thinking it’ll show up, but I’ve cleaned my room and I am generally pretty darn organized – I just have no idea where it went.

And then I saw the the announcement that Crash Pad 4 is officially out and available on the Blowfish Blog and thought, aw shit. Better get moving on that review.

So Kristen and I settled in to some blueberry pancakes, logged in to my Crashpadseries.com account, and set to watching each of the episodes individually.

Here’s a scene-by-scene recap, with a couple thoughts:

Overall: the sex is skilled, the chemistry is hot, the depictions of queerness are real and varied. I will probably watch the butch/femme scene again, but generally this isn’t one of the DVDs I’ll watch over and over. Of course, I have a particular bias toward the butch/femme dichotomy, so generally that’s a prerequisite for scenes that I watch again and again.

But damn if I wasn’t missing out. Now that I have a full membership, I really wonder what took me so long – and I kick myself a little for not getting the membership sooner. 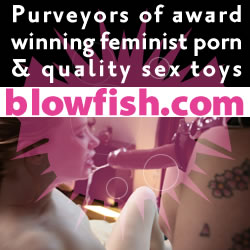