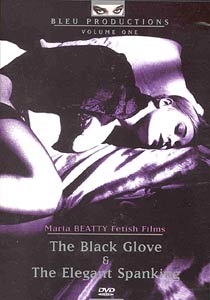 Though this DVD collection of Beatty’s two short films came out in 2003, the films themselves are form 1995 and 1996. They are explicitly lesbian and beautifully shot – if you’re into slow, slow buildup and lots of tension, pretty girls doing naughty things to each other, high femme drag, and strong power dynamics, you should consider this one.

There is virtually no sound in these films – they do have some musical track to them, but they are for the most part silent, with dialogue cards (which are more like revealing the character’s thoughts) like in silent films. I think what I loved best is that Maria Beatty herself is the submissive bottom in both of these films, which I don’t usually expect of the filmmaker – but obviously she knows what she wants, and goes for it. I wonder if she’s in any other films that she made? I’ll have to research that, she was definitely very sexy.

2 thoughts on “Review: The Black Glove & The Elegant Spanking (DVD)”