Let’s have a review, shall we?

I’m way behind on product reviews, I have a list and it kinda just keeps getting longer. I’m moving away from doing reviews, actually, trying to be much more discerning about which sites and which products I take on, especially since I don’t use all that I already have. And of course I’m still taking some products for Babeland, which continues to be one of my favorite toy shops. I’ve probably told my Babeland story a dozen times, but I credit their sex-positivity, queer-friendly staff and products, and endlessly useful workshops with a lot of my own queer sexual awakening. I made a special trip to the Capitol Hill store in Seattle when I moved there in 1999 and, like many first-time visitors, purchased the Dirty Dice before I left. It took me another year or so to actually purchase my first strap-on and attend a spanking workshop, and I’ve been learning from them ever since.

They are such an excellent introduction to the worlds of sex-positivity and sex toys, that is precisely their strength and still something they do better than just about any other queer and feminist toy store, in my opinion. That reminds me—the founders of Babeland, Claire Cavanaugh and Rachel Venning (who are included on the Top Hot Butches list, though I’m told that Clare does not identify as butch, though Rachel does), have a new book out! Moregasm: Babeland’s Guide to Mind-Blowing Sex is out and fantastic. I especially like the design of the book, it’s so much fun to flip through. The graphic design and layout is fantastic, and it’s kind of like the sex ed class that should have been available when you went to college in a book form. The site calls it “a warm, expert, and witty guide to a truly satisfying and exciting sex life. Especially helpful for those at the beginning of their sexual self-discovery, Moregasm combines gorgeous, glossy visuals with real-world advice and the frank, reliable information you’ve come to expect from Babeland.”

On to the toy! 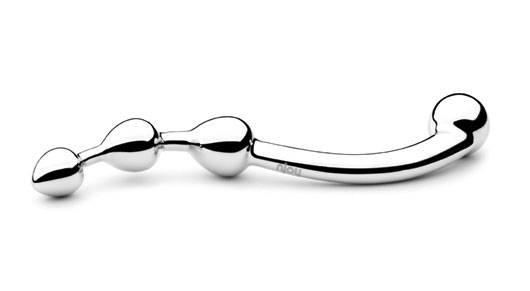 I kind of feel like the Njoy toys review themselves. I mean do I even have to say anything about the actual function? I kind of want a fancy stand for it (does anybody make those? Someone should!) so I can display it on my coffee table or on a lighted shelf. It really is as beautiful as it seems. 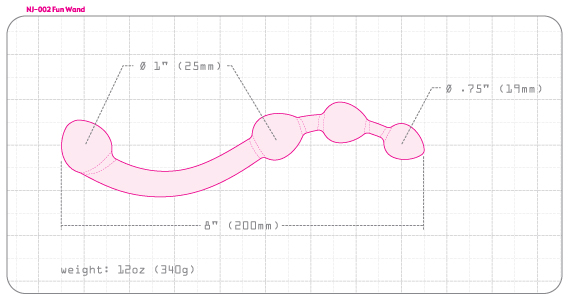 I do tend to bust out the Njoy toys during my own solo masturbation play, though; both this one and the Pure Wand. Partly it might be that it does not have a flared base (and therefore makes it a little bit dangerous to play with anally—things actually can get lost up there you know, unlike the vagina which has nowhere to go. Do NOT insert it all the way and be sure to keep a strong grip on the end), and because I only insert it about halfway, it’s not the most comfortable to use when on your back.

Since this review has been half in photographs, I’m going to give you one more:

Photograph is by Melvin Moten, aka mErocrush, reprinted with permission. Model: StephyC, taken August 2009 in Tampa during FetishCon ‘09.

Also, it’s a really fucking hot photo. Add to the list of more amazing ideas of what to do with a Fun Wand.

Njoy Fun Wand photos from njoytoys.com. The Njoy Fun Wand was sent to me from Babeland to review. Buy the Fun Wand and other fabulous sex toys at your local feminist sex-positive queer-friendly shop, or, of course, at Babeland.