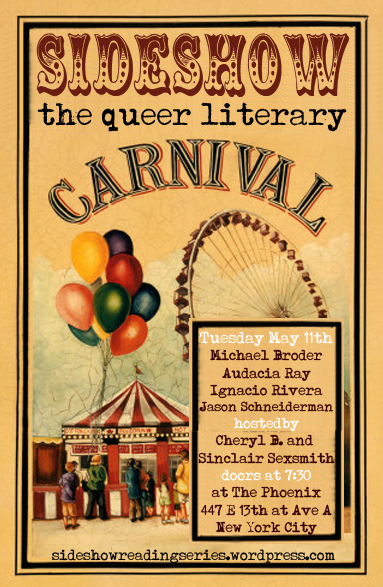 The Masturbate-a-Thon website hasn’t been launched yet, but save the date—it happens this year on May 30th.

Please join us! It will be a fantastic gathering.

Michael Broder’s poems, reviews, and essays have appeared in Painted Bride Quarterly, BLOOM, Columbia Poetry Review, Court Green, and other journals, as well as in the anthologies This New Breed: Gents, Bad Boys and Barbarians 2 and My Diva: 65 Gay Men on the Women Who Inspire Them. He is currently completing a doctoral dissertation on queer kinship and camp aesthetics in Roman satire at the City University of New York. Having grown up in Coney Island in the days when there was still an “under the boardwalk,” he claims to be the original SIDESHOW!

Audacia Ray is a media maker and activist who is passionate about sexual rights. Presently, Audacia is the Program Officer for Online Communications and Campaigns at the International Women’s Health Coalition, an adjunct professor of Human Sexuality at Rutgers University, the co-host of the monthly reading series Sex Worker Literati, and the author of Naked on the Internet: Hookups, Downloads, and Cashing In on Internet Sexploration. Audacia is a former sex worker who was an executive editor at $pread magazine for three years and is a co-founder of advocacy organization Sex Work Awareness, where she provides media training workshops for sex workers. Dacia is also the award-winning director and producer of the porn feature The Bi Apple as well as the producer and star of the comedic film short Dacia’s Love Machine. She has blogged at WakingVixen.com since 2004.

Ignacio Rivera aka Papi Coxxx who prefers the gender-neutral pronoun “they” has spoken at home and abroad on various topics including but not limited to sexuality, racism, sexism, transgender issues, anti-oppression, anti-violence, sexual liberation and multi-issue organizing. Ignacio’s work has manifested itself through skits, one-person shows, poetry, lectures, workshops and experimental film. More at http://www.ignaciorivera.com.

Jason Schneiderman is the author of Sublimation Point, a Stahlecker Selection from Four Way Books, and Striking Surface, winner of the 2009 Richard Snyder Prize from Ashland Poetry Press. His poetry and essays have appeared in numerous journals and anthologies, including American Poetry Review, The Best American Poetry, Poetry London, Grand Street, The Penguin Book of the Sonnet, Story Quarterly, and Tin House. He has received fellowships from Yaddo, The Fine Arts Work Center, and The Bread Loaf Writers’ Conference. He was the recipient of the Emily Dickinson Award from the Poetry Society of America in 2004. A graduate of the MFA program at NYU, he is currently completing his doctorate at the Graduate Center of the City University of New York.