The Femme Conference 2010: No Restrictions is happening in Oakland, CA in just three short weeks. There’s still time to register!

I attended in 2008 in Chicago and it was a pretty amazing experience. I took away so many conversations about identity development and expression, about visible physical markers and femme fashion. I would love to attend again, maybe next time.

Recently, I was chatting with a femme friend who was in from out of town about being in leadership or facilitator positions within this gender world, and how many baby femmes and baby butches feel lost and alone when they’re coming to these identities. “I always tell them, read your history!” she said. There are lots of books out there, actually, that discuss the same things we are going through. Sure, they might be a little dated; sure, we might have a better sense of how to break identity alignment assumptions than those writing thirty years ago. But we do not have to reinvent the wheel: much of this work has already been done for us, and even has already been recorded and written about.

So, as a countdown to this fantastic conference, I’m going to feature a couple of different femme tomes that are really important in the heritage of the femme world—or that have been to me. If you haven’t read them, I highly recommend it.

The first, and most recent publication about femme identity (as far as I know) is the two-volume set Visible: A Femmethology edited by Jennifer Clare Burke and published by Homofactus Press. 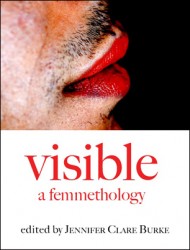 Visible: A Femmethology is a collection of personal essays from over fifty contributors who explore what it means to be a queer femme. Award winning authors, spoken-word artists, and totally new voices come together to challenge conventional ideas of how disability, class, nationality, race, aesthetics, sexual orientation, gender identity, and body type intersect with each contributor’s concrete notion of femmedom.

Though the book launched more than a year ago, the book’s website still has some very valuable stuff, including a large list of contributors, if you’d like to look up some inspiring writers, and mini-interviews with them about what it means to be femme.

The cover was a bit controversial, when it came out, but there are some male authors in this book who explore their femme identity, so I can understand that they intended to show that femme is not something that exclusively belongs to cis women.

I’ll admit, I’m a little biased with this book, because I have a piece in Volume II called A Love Letter to Femmes. Dacia recorded it for me last year, when the book was coming out, so there’s an audio recording of me reading it, if you’d like to hear it. But even if I didn’t have a piece in it, the collection is a great read and will I think inspire any femme to feel less alone. Most of the focus in this anthology, probably because of the title, Visible, is on the invisibility of femme identity and the ways that, particularly, straight folks assume femmes are also straight. I have my own thoughts about invisibility, mostly about sovereignty and the outsider complex that many of us feel, but regardless of my own opinions, I know visibility is something that pretty much all femmes feel at various times, so it’s an important thing to study and bring light to and discuss.

Order the two volumes directly from Homofactus Press (if you’d like the small indie press to get the most benefit), from your local independent queer feminist neighborhood bookstore, or, if you must, from Amazon.

5 thoughts on “Countdown to the Femme Conference: Three Weeks”