The conference itself is tomorrow, Saturday the 25th, with registration opening up at 9am and workshops beginning at 10am. I’m doing a Cock Confidence workshop at 1:30pm tomorrow, and I have two Aslan Leather harnesses, three Vixen Creations cocks, and another Tantus cock to give away. I’ll also be showing off the brand new hot-off-the-presses VIP Super Soft pack-and-play cock that is barely even released.

I’m also modering a panel called “In the Public Eye: Visibility in Media” with some fabulous folks: Denise Madison from GirlzParty, Grace Moon from Velvet Park Media, Gina Mamone from Riot Grrrl Ink, and Dasha Snyder of The D Word fame who writes at Digital Goddess.

But aside from my own involvement in the panel, there are many more things going on! Tonight is a social event to meet & greet conference attendees at Speed Friending/Dating at Dixon Place, tomorrow is a special Queer Memoir/Sideshow Reading Series Mash-Up at Bluestockings Bookstore, and there’s a special Butch Voices Submit play party in Brooklyn late tomorrow night.

I don’t know if I’ll make it out to play, but I’m really looking forward to meeting people, hanging out, and talking about butch things all weekend. Kristen is baking her “face off,” as she is prone to saying, making her famous rosemary sea salt chocolate chip cookies, savory corn and cheddar muffins, and a special treat for someone’s birthday tomorrow.

If you miss these events, there’s another Butch Brunch on Saturday, October 16th which will be a nice follow up to the conference for those who miss the company of other butches. 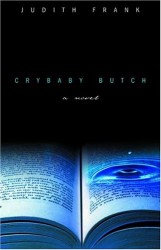 To tie up this nice countdown, I’m featuring a recent novel from 2004 called Crybaby Butch by Judith Frank, published by Firebrand Books. It won the Lambda Literary Award for Lesbian Debut Fiction in 2005. My (lesbian) book group read it about a year and a half ago, and we all liked it quite a bit—which is hard, usually novels especially are hotly contested. I remember there being some disapproval of how the femme partners were depicted (as controlling, fairly stereotypical “women”, perhaps with not enough depth) but we liked the butches.

Drawing on her experience as an adult literacy tutor, Judith Frank’s first novel traces the difficult and sometimes hilarious connection between two butches of different generations – a middle-class, thirty-something adult literacy teacher and her older, working-class student. With a disparate group of adult learners as the backdrop, Frank examines, with warmth and wit, the relationship between education and gender, class, and racial identity. Judith Frank is a winner of the Astraea Foundation’s Emerging Lesbian Writer’s Fund prize in fiction. A professor of English at Amherst College, she lives and writes in western Massachusetts.

There are not very many books out there with “butch” in the title, and even fewer of them published in the last ten years. It’s a good read that is complex and interesting, engaging and emotionally enthralling. A few folks mentioned Crybaby Butch in the comments when I featured Stone Butch Blues two weeks ago, all of them with praise for the book.

Buy it directly from Firebrand Books, from your local independent bookstore, or, if you must, from Amazon.

So now that I’ve gone through some of the major butch books, tell me, which ones did I leave out? Are there others I should have featured?