There were a couple reasons I did this. I wanted to deepen my writing, I wanted to continue writing erotic fiction, and I found that I could write variations on a theme that someone else gave me much easier than I could come up with my own scenarios. I was figuring out that that’s the kind of top I was, too—that when someone asked me to do a couple things, like, say, finger them and kiss them for a while, take their clothes off, throw them on the bed and fuck them until they came, that it was no problem for me to follow their requests, with variations and detail, in a way that was toppy and dominant. It was harder for me when I’d sleep with girls (or write characters, even) where anything was an option and I could do whatever I wanted. Sometimes I would freeze up. Not because I didn’t want to do anything, but because there were so many options, where do I even start?

And there were so many good scenarios that I decided to write up five “honorable mention” stories as short-shorts, which was great practice for me, too, because I noticed sometimes that my long stories took so long to finish. In addition, I wrote up five “finalists.” Then, once all ten stories were written and published here on Sugarbutch, I asked readers to vote for their favorite, and the person who submitted that scenario was henceforth known as a Sugarbutch Star.

So, these are the stories from the first year:

And I made them into a chapbook. I did two printings of this chapbook, each editions of 100, and I’m not planning to do another printing. I have about a dozen left, and I’m selling them for $10 each which includes shipping anywhere in the US (if you’re outside the US, I may ask you to send a couple more bucks to cover shipping, depending on the cost, but I’m glad to send it to you). 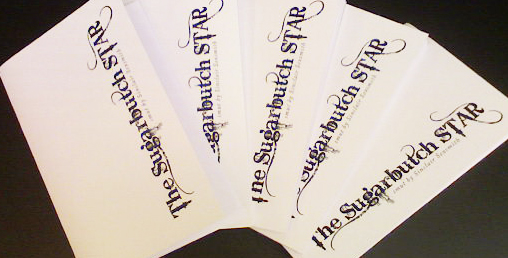 Want one? Email me, and if you’re in the first 12, I will reserve a copy for you and send you further details (the easiest way for me is to accept payment via Paypal).

I did the Sugarbutch Star project for a second year, too, and I decided I would only pick five stories as finalists, no matter how good all the submissions were. These were what I finished for the second year:

I started the fifth story, but never finished it. I still think I might, but maybe it’s time to let that go. (It’s just such a good story! Or it would be, if I could ever finish it.)

So here it is folks … last call for the Sugarbutch Star Chapbooks.