Sideshow: The Queer Literary Carnival, the reading series that I host and produce with Cheryl B., has had an amazing year. December will make our 9th show, and each one has been more amazing than the last. Our audience continues to grow, and our readers continue to be amazing. I’m really excited about the line-up we have coming for 2011 (to be announced soon), and hope you’ll continue to join us in New York City for some fantastic literary queer stories!

Next up: Family Traditions on December 14th.

This month’s theme is FAMILY/TRADITIONS, starring:
Alysia Angel (what I do when you’re not looking)
Heather Gold (Tummelvision.tv)
Silas Howard (By Hook or By Crook)
Whitney Porter (Ping Pong Literary Journal)
Lea Robinson (Butch Mamas) and Elizabeth Whitney (The Secretaries) 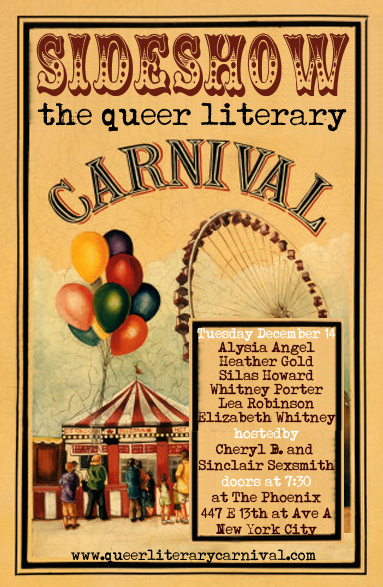 Alysia Angel is a wise cracking southern high femme currently living in Portland, Oregon. She is self published in the way of series of chapbooks titled “what i do when you’re not looking” and is currently working on an erotic anthology as well as a non-fiction book. This year she has read at Femme Conference, Butch Voices open mic, performed for Flabulous 2 and Red Hots Burlesque in the Bay area and facilitated a body positive workshop for International Women’s Week at The Evergreen State College. You can also find Alysia reading at Dirty Queer in Portland, being a good school girl, writing on her thigh on your bathroom floor, eating ribs with her bare hands, traveling with vintage pink Samsonite suitcases and living the amoret dream.

Heather Gold plays venues like UCLA, the Punchline, the Purple Onion, SFSketchfest, Gotham Comedy Club, Laughing Liberally and AltDOTComedy at the Rivoli in Toronto. Heather also brings entertaining insights to places like Google, Web 2.0 SXSW BlogHer, AIGA, Social Venture Network, Personal Democracy Forum and Overlap 08. Driven to comedy by law school, Gold never does the same set twice. Her unique style—raw and participatory, inflected by confessional politics—is a reflection of her unorthodox artistic path: studies at Yale and Northwestern Law, training at Groundlings, plus years soaking up Hollywood and the geek culture of the Net and Silicon Valley. Heather worked the web since it’s earliest days in 1995, influencing her innovative form of comedy which involves the audience whenever possible, drawing them out and threading and connecting ideas and people. Heather hosted Austin Gay Pride, has written for Alan Cumming, and hosts her own talk show podcast, The Heather Gold Show which features bold conversations about politics, relationships and big life questions, mingling web celebrities with the avant-garde, with guests including Flickr co-founder Caterina Fake, blogger Merlin Mann, and twitter founder Ev Williams. boingboing calls her “one of our favorite comedians.” Heather hosts the weekly Tummelvision.tv show about the art of social engagement for Leo Laporte’s TWiT Network. She also contributes to media like The San Jose Mercury News, Tech TV, The Learning Channel, The Toronto Globe & Mail, and CBC Radio. She’s been quoted and covered in places like WIRED, Salon and NPR. Heather is one of the creators of EqualityCamp, which brings techies and activists together to organize the current gay marriage movement. twitter.com/heathr

Silas Howard’s, (writer, director, and musician), first feature, By Hook Or By Crook, was a 2002 Sundance Film Festival premiere and five-time Best Feature winner. The film secured theatrical release from Artistic License, national video/DVD distribution with Wolfe video and was the picked up by the Sundance Channel. His screenplay, Exactly Like You, based on the life of Billy Tipton, was a Nantucket Screenwriters Colony fellow. Howard’s first short documentary, What I Love About Dying, premiered at the 2006 Sundance Film Festival and his music videos have aired on MTV and LOGO networks. His new short film, Blink, starring Ben Foster, is currently on the festival circuit. Howard received an MFA in directing at UCLA, was awarded the Kovler Family Fellowship in Film & Television and nominated for the Rockefeller New Media award in 2005 and 2007. His short stories have been anthologized in several publications such as “With out A Net”, “Live Thru This” on Seven Stories and LTTR’s art journal.

Whitney Porter is originally from Houston Texas; however for the last 14 years she has resided in Park Slope, Brooklyn. Currently she works on Wall Street, as a research /administrative assistant at a credit rating agency. And although these are the absolute worst times to be working on Wall Street she is thankful that she is gainfully employed and has had no incriminating work emails leaked to the NY Times and the Wall Street Journal, although she admits it would be nice to be published. She has done undergraduate work at the University of Houston and Brooklyn College and currently studies with Phillip Schultz at the Writers Studio, in Manhattan. She has had recent publications in Battered Suitcase a bi-monthly webzine from Vagabondage Press, and Ping Pong Literary Magazine, out of the Henry Miller Library in Big Sur, California.

Lea Robinson is a multi-talented butch who is playing a multi-talented butch this December in LET THEM EAT CAKE at Dixon Place. You may recognize her from Dixon Place ’s HOT! Festival Butch Burlesque event or as the emcee for Boxers Off! An Evening of Butch Burlesque at Stonewall. Other NYC appearances include Queer Memoir, The Bulldyke Chronicles, “Officer Ruffins” in the lesbian serial ROOM FOR CREAM at La MaMa, “Alma” in BUTCH MAMAS at WOW Cafe, and as part of Bitches With Barrettes in The Femme Show www.thefemmeshow.com at Re/Dress. This summer she shared a bill with Elizabeth Whitney in the HOT! Festival at Dixon Place in SYRUP IN OUR SHORTS, AND OTHER SOUTHERN PLEASANTRIES, and she is currently working on a new solo show, YOU AIN’T SPECIAL, which chronicles her adventures as a genderqueer actor in New York City. She was featured in GO Magazine’s 2009 Edition of 100 Women We Love. In her former life, she was a baller and played in a final four, which has led to her ongoing work with the National Center for Lesbian Rights and It Takes a Team! on homophobia and transphobia in athletics. www.learobinsonactor.com

Elizabeth Whitney is an actor and a writer/performer with a penchant for campy comedy who has been assured that she is not typecast in her role as an endearingly neurotic femme in LET THEM EAT CAKE this December at Dixon Place. She was awarded the 2010 Best Newcomer Playwright Award from Curve Magazine and featured in GO Magazine’s 2009 edition of 100 Women We Love. Other recent performances include Queer Memoir, “Patty” in THE SECRETARIES (Best Ensemble NYC Fringe 2010), SHOWGASM (Ars Nova), The Bulldyke Chronicles and the HOT! Festival (Dixon Place), Drunken Careening Writers, the Famous Lesbian Comedy Road Show, and The Femme Show www.thefemmeshow.com. She is currently collaborating with her partner Lea Robinson and director Melissa Li to develop SYRUP IN OUR SHORTS, a very true love story about being a queer, interracial couple as part of The Miscegenations Project www.miscegenations.org, a performance workshop about intersections of race, sexuality, and gender identity. www.elizabethwhitney.com

3 thoughts on “The Last Sideshow of 2010: December 14th, Family Traditions”