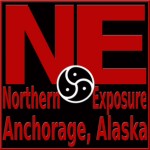 I’m catching a plane tomorrow for Anchorage, where the third annual Northern Exposure kink conference will be taking place.

NE is run by Sarha, who was just sashed International Ms. Leather 2013 at the IMsL weekend and contest in April in San Francisco. I was on the judging panel for this year’s IMsL contest, and while I promise I didn’t play favorites (Alaska rules!), I’m thrilled that my home state is representing the leather community this year, and I’m really excited to participate in the conference she produces.

The lineup looks pretty incredible. Though NE is remote, Sarha has attracted an incredible group of presenters who are teaching on a wide array of advanced topics. I’m particularly interested in the many M/s workshops that are offered, and I suspect I’ll be sitting in on as many of those as I can, taking copious notes. That’s a recent study subject of mine that I am really enjoying delving deeper into. I’m also really excited that Midori is presenting! I have been in classes of hers before, but it’s been many years, and I’m looking forward to learning from her. Lee Harrington is also going to be teaching!

Northern Exposure happens to coincide with Pride fest, so Sarha hooked me up with the folks over there, and I’m going to be teaching Writing Dirty, my skills for writing about sex class, on Thursday night (tomorrow!). I’m up against Drag Queen Bingo, so I suspect it might be a small class, but I hope we’ll have some good discussions and write some interesting sentences. I LOVE teaching writing classes, and often the ideal class number is something like 7-12, so I will be very happy with a small class.

The boy is coming with me. We’ve met at leather conferences before, but aside from IMsL in April, we haven’t actually come and gone from one together. And at IMsL, we didn’t get to play much (you know, just once or twice a day for short scenes, no big epic gang bang like at Winter Fire, no long, elaborate scene like at last year’s IMsL. I’m glad he’ll be there with me. I’m only teaching one class, Cock Confidence, aside from the writing class for Alaska Pride, so I should have some really nice time to play.

(Hopefully I’ll come back with some good stories to tell y’all.)

And, speaking of IMsL.

I’ve been kinky since as long as I can remember, adding sensation play and power dynamics to my friendships, playtimes, and interactions since my first adolescent sexual experimentations, and probably even a bit before that. I’ve considered myself part of the BDSM communities since … well, at least formally since about 1999 when I got my official membership to the SPCC, the Sex Positive Community Center (now the Center for Sex Positive Culture) in Seattle. But I’d only ever really gone to classes or events to gain a particular skill to take back to my bedroom—I never really stuck around in the leather community.

Until recently. Really it was Dark Odyssey that started me on that path in a significant way. I thought I was familiar with leather culture and the kink/BDSM worlds, but when I started teaching more at leather events, I experienced how different it really was, and realized how I’d longed for leather community even without knowing it. I was on the board of the Lesbian Sex Mafia in New York City around that time, too—clearly seeking some more kinky community, not just to support my own kinky efforts but also to immerse myself in and learn new, different things.

I found a lot of what I was seeking at Dark Odyssey, and I found a lot of people who really felt like my people in a new way. (I’m kind of sad to be missing Fusion, which is next week! But it was either Fusion or Northern Exposure, and I’m so glad to be in Alaska right now. I don’t know if I’ll make it to Summer Camp in Maryland in September, but I would really like to. I’ve been two years in a row and I’ll miss it if I’m not there.)

So when I ran into Glenda Ryder, who runs IMsL, at Summer Camp last summer, I was thrilled to consider the possibility of being a judge for IMsL 2013. I knew very little about the history of leather contests, what it pertains, what a judge would do (aside from the obvious, duh), but I’d attended once (and watched almost exactly 20 minutes of the contest) and was interested in being more involved with leather culture, so I said yes. 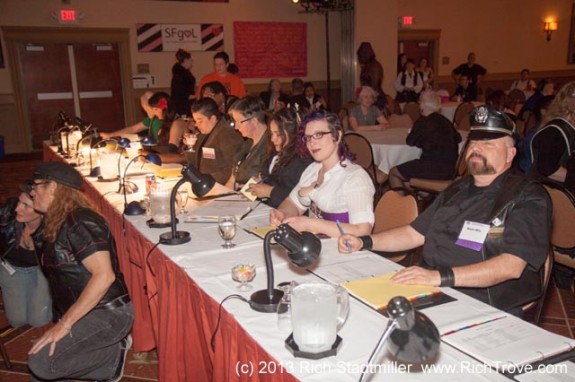 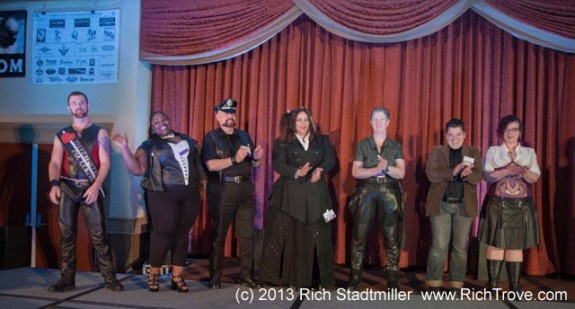 The judges judging | The judges brief moment in the spotlight, onstage, when they introduced us

I spent more time with the judges panel than anyone else that weekend, and they were lovely people I’m thrilled to know. (One of my favorite activities was passing dirty fairy tale stories back and forth with Tillie during the contest.) It was great to spend some time with KD Diamond, and Sarah Vibes, both of whom I know from New York, and to meet Woody, the current International Mr. Leather, and hear more about the traditions of leather, fundraising, queerness, and history.

I spent so much time at the contest part of the conference itself that weekend in April that I barely had time to do much else—I didn’t attend any of the workshops, though I wish I had. I did send my boy to attend a power exchange relationships class called “Exploring and Deepening M/s, D/s and PowerExchange Relationships” taught by Liza and Jody, which was excellent, from what he relayed, and he took many interesting notes and gathered some concepts we still discuss. I also participated in a author’s meet and greet with Mollena, Laura Antoniou, and Tillie King (one of my fellow judges), hosted by Mr. and Ms. SF Leather, where we read some snippets of our work (and got to see many of the literarily-inclined folks at the conference congregate in one place, which totally got me hard).

Oh! And, here’s a quick sidenote: Laura Antoniou read from her most recent book, The Killer Wore Leather, which is a murder mystery set at a leather contest conference weekend. I picked up the audiobook on Audible.com for the long 5-day drive through Canada to Alaska, and Rife and I have been listening to it and really enjoying it. The reader is excellent, and the story is really fun. It’s kind of amazing to see our community through an outsider’s lens, and it’s also a very tight insider’s satire. If you want to know more about leather community, this book is definitely a fun place to start. Full review to come when we finally finish the book.

I don’t have tons to say about the actual contest itself, aside from that it was a lot of fun. I enjoyed being behind the scenes but still in an important role as a judge, as someone described it to me that weekend. I don’t always want to have attention on me, but I do like to be important, somehow, so that felt good. I thought the contestants were incredibly well spoken, all had very impressive resumes (and formal leather), and had both new young spunkiness and wise experience from many years of serving and guiding and participating in these communities. I learned a lot.

I’d prefer to go to more classes, and I’m looking forward to being more of a participant at Northern Exposure this coming weekend than I will be working. I hope to have some fun, learn some things, and have lots of conversations about what it’s like to be kinky in Alaska.

I’ve got lots more things to say about Sarha and how she won (she won!) on an excellent platform about outreach to leather in little towns and not just big cities, how she excited (and kinda scared) everyone with her black bear fur lined chaps (where do you think leather comes from, folks?) and how it felt to have my Alaskan identity coming together with my queer and kink identities, too. I could talk about the MC and how unimpressed I was with her racist jokes (just because you “make fun of everybody” does not exclude you from racism). I could talk about the beautiful redhead who had a pet girl on a leash with her all weekend, and a new friendship and relationship that has bloomed from a distance. But this post is already 1600 words long, and it’s time to go to bed, even though it’s 10:44pm and the sky is still light.

It’s going to be even lighter in Anchorage. I’m really looking forward to soaking up all the midnight sun I possibly can.

(Official conference photos by Rich Trove, thanks Rich!, except for the instagram ones taken by me.)