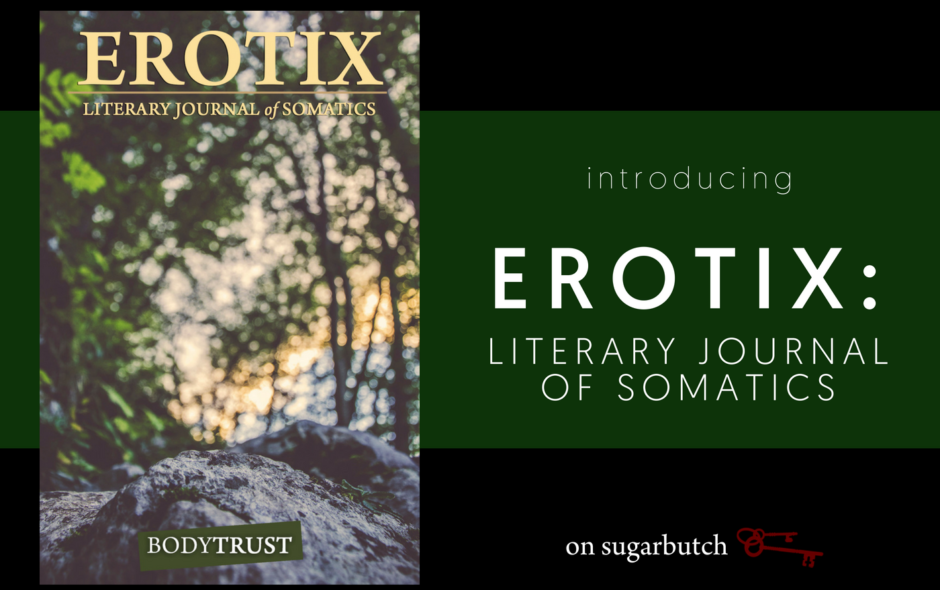 For a few years now, I’ve been working on an anthology called Erotix: Literary Journal of Somatics. I put out a call in late 2016, thinking it would be a quarterly journal (!) published by Body Trust with the intention of putting some words to the erotic embodiment work we pursue, which is often mysterious. But the personal (trauma) crises I’ve been going through have kept me pretty much unable to get to my big projects since then, so it’s just sat in my inbox (and in the back of my mind, making me feel awful). On top of that, the submissions I received were somehow not quite what I was visualizing, though I couldn’t really put my finger on what I was visualizing to explain it, either. I thought I might have to do a second call for submissions.

But as I’ve been able to pick up projects — and complete them! — again this year, I’ve been tackling Erotix. It’s a smaller volume than I expected, but it finally came together in some sort of form that makes sense for me. No idea if I’m going to make other volumes — with the Best Lesbian Erotica project on my plate right now, it will probably be a little while before there is another one, but of course now that this is finished I’m excited and want to do more. I also don’t want to promise another one and then keep it incomplete for a long time.

But here it is, the first issue! I am excited to share it with you. It’ll be ready to buy in August.

I find this to be true in anthologies, too. A group of stories, tied loosely around a theme, manifested through a writer but now a being in their own right, come together with different expressions. Through the various refracted perspectives, sometimes deeper truths emerge. Sometimes a resonance emerges like a singing bowl which can buoy, which can soothe. Sometimes each piece adds it’s own perspective on the melody, like the different instruments in an orchestra.

Though not everyone can be in temple with us, I hope that as you sit with this small volume of words and have a glimpse of what it might be like. Each of these contributors bring their body and desire to the page, and without each one, the circle of this book would not be complete.