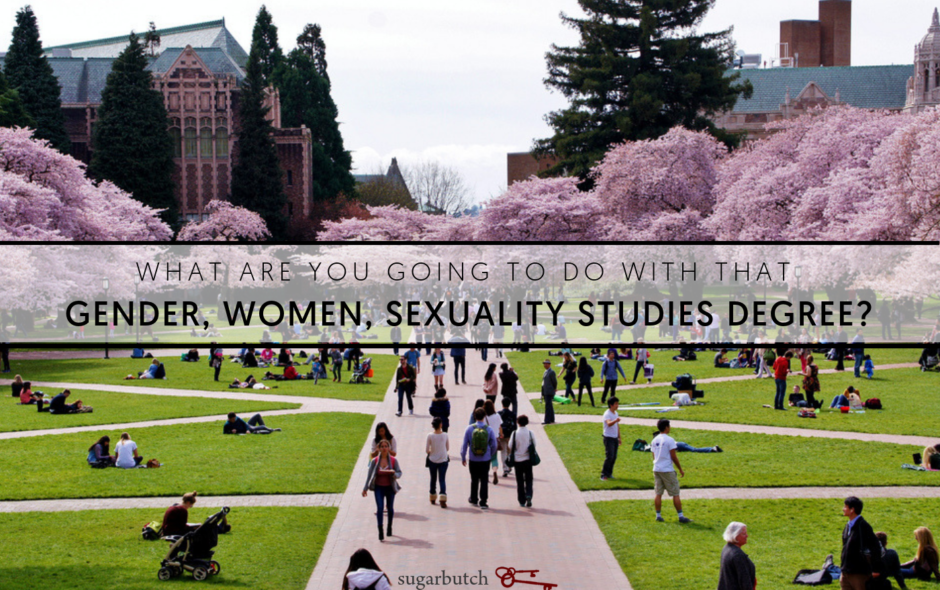 I wrote & performed a poem called “What I’m Going To Do With My Women* Studies Degree” at the Gender, Women, Sexuality Studies graduation in 2004.

Ever since I saw it, I’ve been thinking of this tweet. Things are changing so, so much. I’m so grateful.

One of my favorite parts of the poem? “People ask me — ‘what are you going to do with that degree? Go work at the women studies factory?'”

(That poem is called Every Single Day on my 2004 spoken word poetry album, For the Record.)

When I took my first feminist theory class, at Seattle Central Community College in 2000 (wish I remembered the professor’s name to give credit), I had such a lightbulb moment that I felt bowled over. Oh. I’m a women studies major. Right. I forgot. Well, it’s not that I forgot, it’s that I had never thought that thought before, but now that I had, I knew completely that it was correct.

I needed that degree because I needed to understand the suffering I had related to my nonbinary (though we weren’t using that word then) gender and my queerness, and I came out of it with a bigger understanding of other intersectional identities like my artist/semi-working class background and my whiteness. That degree was survival, was key for me to be able to be an adult in the world and not be completely shut down by my experiences as a person with marginalized identities.

I was also a Creative Writing/English major, and my tentative plan was to work in book publishing. I figured I’d be writing eloquent emails and identifying the sexism in the workplace, and that’s what I’d be doing with it.

I used to feel some envy — or even jealousy — when other people would write eloquently about intersectional oppression, because I wanted so badly to do that. but jealousy is often the best teacher, because I doubled down and studied and wrote and wove my experience in with all the things I was learning. Sometimes I say Sugarbutch is my graduate degree, only partly in jest.

I never expected to have the tiny platform (very well known in very few places) that I have, talking about sexuality, gender, kink, and relationships. so much of what I know comes from that degree, and from the queer education my first queer roommate led me through when I was 20, 21, 22.

So I saw this tweet the other day and I’ve been thinking about it ever since. It stopped me and I had to pause my scrolling and let it settle in.

Things are changing so, so much. I’m so grateful.

Seeing so many people picking up this conversation and doing so much work, in such huge ways … instead of feeling jealousy, I just feel relief.

Relief that the racism, sexism, homophobia, xenophobia, transphobia, heterosexism, cissexism, is being called out from within tiny communities to a national level. Not everywhere, I know, and I’m in a self-selected bubble on the internet just like I’m in a self-selected bubble in the liberal cities I’ve lived in all my adult life. But because of the internet, and advancing technology, and because of the marginalization and terror we are feeling so hard due to this presidency, it is happening in such larger ways.

And I’m feeling this slow ungripping, this letting go, this holding on to it softer. I’m still so invested, and I still get in there and get my hands and face and feet and whole self dirty sometimes, but I don’t feel obligated the way I did before.

Still, often, I feel like there is so much to do and so little has changed. But when I pull back a little, there are such significant differences even in my lifetime.

I’m so grateful for the strides.

And thank you, Earth, first for teaching me so much, and now for continuing to catch up.

*The degree at University of Washington Seattle at the time was called Women Studies, definitively with no apostrophe-s, because it was studies about women, not studies that women do. It’s now changed to Gender, Women, Sexuality Studies, which they abbreviate to GWSS and pronounce g-whiz. (Love it!) As a student, my class petitioned the department to change the name and expand to gender and sexuality, even to use the word ‘queer.’ This is one of the oldest Women Studies programs in the country, however; started in the early 80s (I think), and the first batch of professors were just then starting to retire. They said, you have no idea how hard we fought to use the word women, to convince the university that women studies is legit. I learned a lot from those conversations, and while I’m glad they changed the name, I respect the roots and think it’s important to name the lineage it comes from. Much love to the professors there who changed my life.

One thought on “What Are You Going To Do With That Women, Gender, Sexuality Studies Degree?”