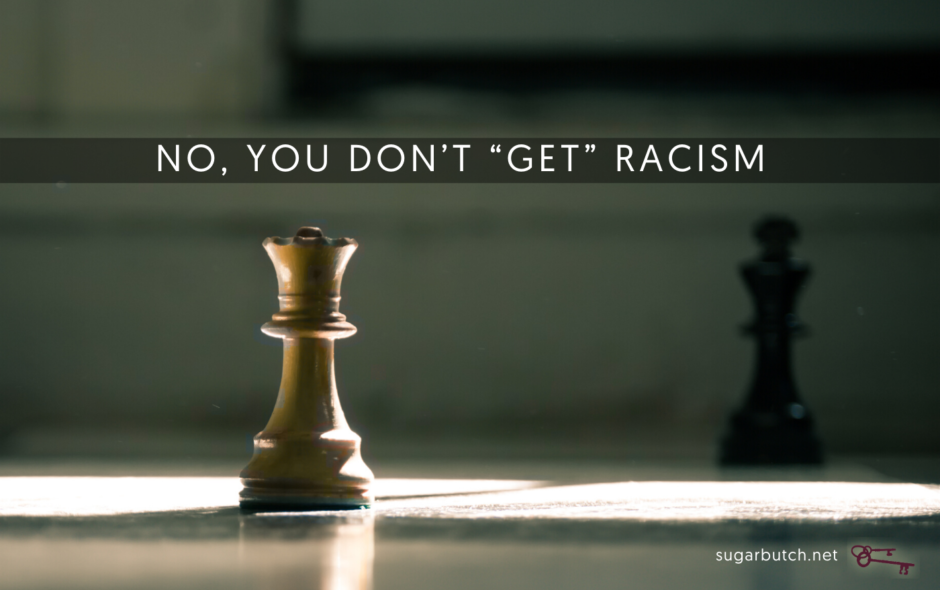 Some white folks say, “I understand racism — I’m [other marginalized identity], I’m oppressed, too.” Or, “I have experienced intense discrimination for being trans, I can imagine what it’s like to be black.”

But here’s the thing: you don’t.

Racial discrimination is not the same as sexism or transphobia or heterosexism or homophobia or classism or any other marginalized identities and experiences.

I — and all of us white folks — have no idea what it is really like to be a person of color and face racial discrimination.

I am educating myself to read the stories and memoirs and artistic creations to learn what it is like, but I still don’t have any lived experience of it. I’ll never really know how deep it goes, how intense it is — because I am not a person of color.

There are some systemic similarities with how marginalized and disempowered groups are treated and disenfranchised by institutions, for example. And there are some similarities in the activist strategies used to build up tolerance, acceptance, understanding, equal protection, and equity.

Like cis folks reacting defensively and overreacting to misgendering someone or getting their pronoun wrong, white folks can work on their white fragility, and work through feelings of white guilt in order to better reflect on their own behavior when they do something racist or racially insensitive.

I do not know what it is like to live as a person of color. But I do know some structures for social activism — which hopefully support liberation — that parallel within both schools of activism.