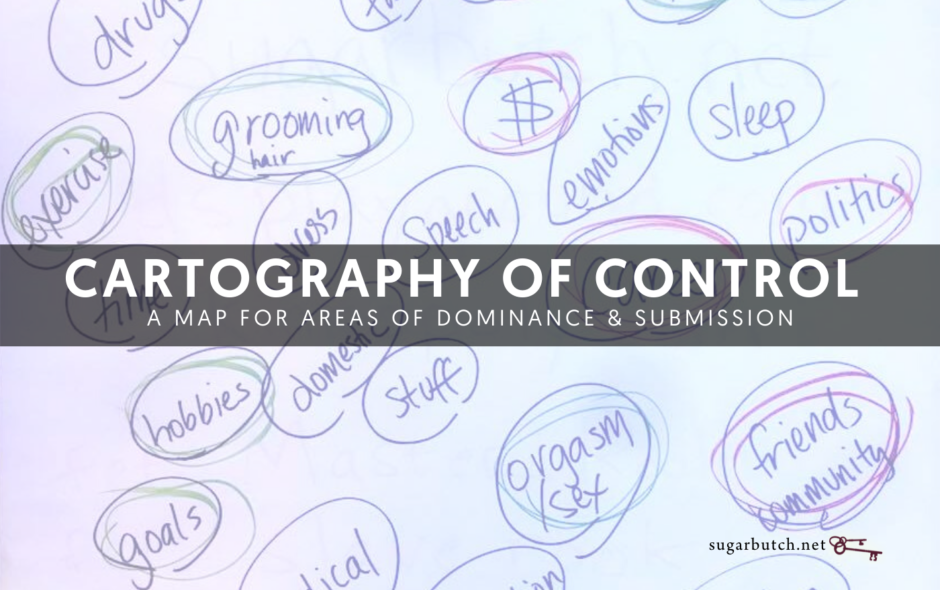 When it comes to control in D/s dynamics, there are a lot of questions to ponder and theorize about.

How do you give over even more to your dominant? How do you take more from your submissive?

How do you work out what your limits are?

How do you take or give more control?

How do I start making rules and protocols outside of the bedroom?

Or maybe you’re just in a D/s dynamic that is excellent, but you both want a little … more? So perhaps the question is simply, How do you step up your D/s dynamic?

This theory can help address all of these.

The Cartography of Control is a Map

The first step is to brainstorm different life areas. These are probably endless, but there are some broad umbrella categories that applies to most folks. Here are some areas to start with:

It’s always possible to think of more things, or to get a lot more specific about things within the categories — grooming, for example, could be divided into how someone keeps their hair, shaving, what products they use in the shower, makeup, their skincare routine — all sorts of things. But for now, we’ll keep the categories broad and divide it into specifics later.

Sort the Categories Into Yes, No, or Maybe

Now that you have a somewhat robust list — it doesn’t have to be exhaustive, but at least is a complete enough list for you to start — sort them into three different categories:

One of the things rife often says is that he can’t give over any area where he himself does not have control. For example, if he was a smoker, he couldn’t give his nicotine addiction over to me, because he isn’t in control of it. I could help him with a plan to stop smoking, but I couldn’t just say, “You are no longer addicted,” and exercise control.
This is quite simplified; you could develop more categories to sort things in to, like “areas I will give over after the permanent collar is on,” or “areas you can control

For now, don’t worry about whether or not the dominant wants to control these categories. That’s a separate step. Just think about the submissive’s part in it, and whether they could or are willing to give up control.

One way to sort these is to write all your categories out on paper, then use different colors to denote which ones are which. Red could mean “no, I will keep control,” yellow/orange could mean, “maybe, depending on circumstances,” and green could mean, “yes, I would like my dominant to have control over these.”

Yes, you can change your mind — fine tune it, think through it, do thought experiments and make educated guesses about how future you would feel if certain areas were under someone else’s control.

After you have the areas sorted, it’s time for the dominant’s part.

Now you should have two sets of lists. Time to compare them

Start with the yeses — those are the low-hanging fruit, the control that is easily on the table! Find the areas where you are both a yes — that’s your sweet spot. There are probably months of explorations inside just those areas alone!

But if you want to keep digging in, find the areas where one of you is a yes and one of you is a maybe, and discuss. Maybe you’ll discover some places where you want to grow more trust, or some parameters for the relationship that you hadn’t previously discussed.

When you’re ready to start exploring a particular area, brainstorm all kinds of things within that category that you could control, and start experimenting with protocol.

But first, a quick word about protocol:

Remember — only add one or two protocols at a time into a dynamic. It sets up the submissive to actually succeed at remembering what the protocols are, and doing them. Plus, it helps the dominant to remember and recognize when the protocol is or isn’t being done, and to act if it does not happen — which is another key piece of managing protocol.

You’re also perfectly set up to start playing with the Protocol Game, if that appeals to you! The cartography of control is a perfect way to figure out some of your training areas, and build the game from there.

Hopefully, figuring out your cartography of control will help identify areas where you can dive deeper into your dominance and submission.

4 thoughts on “Cartography of Control: A Map For Areas of Dominance & Submission”